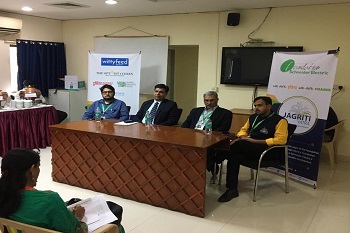 The path of entrepreneurship for era, is a journey of collaborations and alliances, with the help of which, the entrepreneurs grow and reach their goals. Jagriti Yatra embarks upon its 11th anniversary this year, and its mission of building India through enterprise stands more firm and affirmed with support from Schneider Electric Foundation, continuously for 3 years in a row. As said by the chairman of Jagriti Yatra, that today’s generation is witnessing a new paradigm in contrast to the initial years during independence. If at that time Satyagraha was a tool, and Swatantra was a mission, today we believe that Udyamita or enterprise is the new tool and country's development is the new mission and this has to happen in the smaller towns and villages far beyond the metros that we have looked at for far too long.

Jagriti Yatra 2018 commences on 24th December 2018 at Tata Institute of Social Sciences, Mumbai. The yatra was flagged off during the launch ceremony of the Yatra and the journey started at the midnight of 24 December, with 500 yatris who demographically belong to over 28 states and 49 countries. Women empowerment is amongst the core goals of the yatra, and this year approx. 48% of the yatris travelling are females. Apart from the 500 yatris, there are a plethora of luminaries travelling on the train that continuously guide yatris with their ideas. Jagriti Yatra majorly focuses on 7 verticals namely energy, health, agriculture, water, sanitation, manufacturing and education. With an immaculate focus on imbibing the spirit of enterprising India, yatris get a chance to present their business models over the given set of problems, as part of the Biz Gyan Tree (BGT) activity. BGT ensures that yatris are acquainted with the intricacies of starting an enterprise and are prepared for the journey they all dream to embark on. Yatris will visit 12 different role-models over a period of 15 days, across India in a specially chartered train, covering nearly 8000 kilometres on wheels, and the distance travelled in last 10 years by yatris is equivalent to travelling twice around the circumference of the Earth.

Jagriti as an organization has been making continuous efforts to support the district entrepreneurs, through its three main initiatives, Jagriti Yatra, Jagriti Enterprise Network and Jagriti Enterprise Center. Over last 11 years, Jagriti Yatra has been a nurturing ground for over 1200+ enterprises that have impacted over 2 million people across tier 2 and tier 3 districts of India. The mission to provide an invigorating ecosystem to the aspiring change-makers has been actively supported by the strongly bonded family of 5000+ yatris, that have found their roots in various roles, doing their bit, in their own ways. The dream of developing an incubator beyond metros has started taking its shape in the midst of serene and tranquil environs of Deoria village, that has already supported 6 enterprises in last one year.

On behalf of Jagriti Yatra, Our Founder Shashank Mani, said, "This year is the 11th anniversary of Jagriti Yatra. The mission of Building India Through Enterprise has never been more relevant and never had more standing than today. The Jagriti Yatra and our associated program of Jagriti Enterprise Network and the upcoming Jagriti Enterprise Centre - Purvanchal are now poised to be a comprehensive program for enterprise inspiration and creation in Tier 2 and Tier 3 districts of India. We are starting to motivate and impact the 58% Indian youth in these districts who will build India of our dreams through enterprise-led development. We are delighted to join hands with the Schneider Electric Foundation in promoting the need for renewable energy and different innovative solutions among the youth of the country, particularly among our Yatris and alumni. I am sure that with support from the Schneider Foundation and other partners, there will be many motivated Yatris who would come forward to carry forward the vision of building India through enterprise".

If the last 10 years at Jagriti were about building the world’s longest entrepreneurial train journey, next 10 years will be all about building robust enterprise ecosystems in tier 2 and tier 3 districts of the Country.