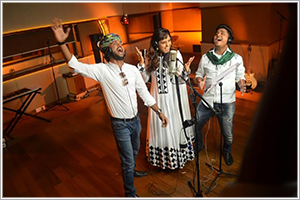 Nothing says patriotism better than celebrating the country’s wide ethnic composition through its languages. Urging the citizens of the country to rise above the diversity of languages and embrace music that unites all on this Independence Day, India’s largest handset player*, Micromax Informatics Limited, unveiled the ‘Roobaroo Micromax Unite Anthem’ in a first of its kind initiative bringing together 10 artists, singing one song in 9 languages.  Recreating the cult patriotic song, ‘Roobaroo’, the Anthem is an extension of the Unite 2 campaign, again a first from Micromax offering users 21 languages in 1 phone, thus democratizing technology for the masses.

Speaking on the occasion, Shubhodip Pal, Chief Marketing Officer, Micromax said, “With the successful launch of the Micromax Unite 2, we have managed to create a powerful medium for our consumers to interact in their preferred language using their phone. The Roobaroo Micromax Unite Anthem celebrates the spirit of unity in diversity bringing alive the versatility of India where myriad cultures merge to form the country’s identity.  We would like to thank all the 10 artists and Sony Music who extended their support for this stunning initiative.” He further added, “Initially conceptualized as an online initiative by Interactive Avenues, we realized the power and the potential of this unique concept and have now decided to execute a 360 degree campaign directed to engage with our target audiences instilling a sense of pride of using their mother tongue. With Sony Music, we have been able to identify the right track – Roobaroo, which is an iconic anthem that connects emotionally with the youth and was most suited to deliver the message of unity.”

Launched in association with Sony Music Entertainment India, the Micromax Unite Anthem is based on the extremely popular track - Roobaroo, which has been rewritten & re-mastered with new lyrics in 9 languages performed by 10 artists. The track has been created to bring in the sounds of a United India covering genres like Classic, Folk, Acapella, Beat boxing & Rap. The artists are Benny Dayal, Raghu Dixit, Neeti Mohan, Brodha V, Voctronica, Sanam Puri, Swaroop Khan, Kamaal Khan, Apekhsa Dandekar and Shruti Pathak.

"Sony Music is very glad to associate with Micromax, the nation's leading handset brand, who has utilised their forte in technology to create a product that addresses the linguistic diversity of our country and brings the liberty to communicate in one's own language to every citizen in India. More so, we are glad to partner with a dominant brand that truly understands and leverages the power of music to engage meaningfully with the youth of today. I extend my sincere gratitude to all the artists who have worked in bringing alive this celebration of freedom through music and to Micromax for supporting this initiative”, said Mr. Kiran D’Cruz, National Head, Brand Solutions – Sony Music Entertainment India Pvt. Ltd.

Amardeep Singh, CEO, Interactive Avenues said, “Micromax is a brand which is always open to try new innovative things, making it one of the reasons why the brand has grown leaps and bounds. For the Unite 2 campaign, we wanted to highlight the most appealing feature of the phone of giving users the freedom to express in their mother tongue. Hence, we came up with the idea of a multilingual theme song as an extension of the main campaign. The Roobaroo Micromax Unite Anthem celebrates the fact that we live in a country which is united despite its different cultures, communities and languages. We are sure that it is going to strike a chord with every citizen of the country.”

Commenting on the Anthem, Benny Dayal said, “I had a great experience recording for Siddharth Sharma (Dub Sharma) alongside all the other singers. I would like to thank Micromax for making me a part of something so diverse and choosing Roobaroo as it has been an anthem to all of us Indians. It's also a song that helps us experiment with many languages thus letting us acquire a new sound. Thank you once again and congrats to those who all were a part of this beautiful concept.”

Neeti Mohan said, “Music unifies cultures, languages and people. On the occasion of Independence Day, I am extremely proud to be a part of the Roobaroo Micromax Unite Anthem with some of the finest singers in the country. It has been a fantastic experience recreating this timeless A.R.Rahman sir’s track in multiple languages to showcase beauty in diversity. Looking forward to sharing this with everyone and hoping they enjoy it.”

Singing the same chord, Raghu Dixit said, “I am very thrilled to be part of the Roobaroo Micromax Unite Anthem which already is based on a cult song among the youth, composed by the legendary Shri A. R. Rahman. The fact that incredibly popular Bollywood singers were already part of this and I was invited to sing a bit in my own language, Kannada, was both a privilege and honour. It was a long awaited wish to work with the producer, Dub Sharma and I thank everyone involved in this project to make that wish come true.”

Introducing Dekkho, Social video network for all your entertainment content!