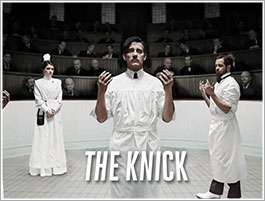 Two brand new series THE  KNICK  and JONAH FROM TONGA, are all set to premiere in India just within 24 hours of their US premiere – on Saturday, August 9 exclusively 100% Ad-Free on HBO Premium Channels, HBO Hits and HBO Defined.

Season One premieres Saturday, August 9 at 7:00 pm on HBO Hits

A brand new series THE KNICK is all set to kick-start on HBO Hits. Set in downtown New York in 1900, THE KNICK is centered around the Knickerbocker Hospital and the groundbreaking surgeons, nurses and staff, who push the bounds of medicine in a time of astonishingly high mortality rates and zero antibiotics. It depicts how a newly appointed brilliant but arrogant renegade Dr. John Thackery’s addiction to cocaine and opium is trumped solely by his ambition for medical discovery. Also, present into this all-white staff and patient hospital is an equally gifted Dr. Algernon Edwards fighting for respect while trying to navigate radically charged city.

Starring Clive Owen (“Children of Men,” HBO’s “Hemingway & Gellhorn”; Oscar nominee for “Closer”) and directed by Steven Soderbergh (“Side Effects”; Oscar winner for “Traffic”; Emmy winner for HBO’s “Behind the Candelabra”), THE KNICK kicks off its ten-episode season on Saturday AUG. 9 at 7 pm, exclusively on HBO Hits, followed by other episodes debuting on subsequent Saturdays at 8.30 pm.

Season One premieres Saturday, August 9 at 8:00 pm on HBO Defined

HBO Premium Channels present another treat for Indian viewers on Saturday, August 9 at 8 pm. Australia’s Chris Lilley, creator of “Summer Heights High” and “Ja’mie: Private School Girl,” is all set to bring back one of his ground-breaking characters, the rebellious 14-year-old Jonah, in a six-episode comedy series JONAH FROM TONGA.

The plot revolves around the main protagonist Jonah Takalua, who, after being expelled from Summer Heights High, is banished by his father Rocky to the island of Tongapatu to spend time with his extended family and get his life back together. But four months later, fed up with Jonah’s antics, his uncle sends him back to Sydney to enroll in yet another school, the Holy Cross School. Once again, the always impressionable Jonah finds himself adapting to a new school and fending off new foes and other delinquents, all while trying to be a “good boy.”

Lilley has not just created and written but also starred in the title role of the new show, which premieres on Saturday AUG. 9 at 8 pm, exclusively on HBO Defined, followed by other episodes debuting subsequent on Saturdays at 8.30 pm.

The show is produced by Lilley and his producing partner, Laura Waters, who previously produced “Summer Heights High” (where the character of Jonah was introduced to HBO viewers) & co-produced by HBO and the Australian Broadcasting Corporation in association with the BBC.

Tune in to watch this incomparable line-up of critically acclaimed HBO original content on HBO Defined and HBO Hits, 100% ad-free and in true HD quality and Dolby surround sound, which will make it an unparalleled viewing experience for viewers.

This follows the recent announcement that all HBO and CINEMAX scripted content on HBO Premium network will air within 24 hours of its U.S. premiere, starting with THE KNICK. The ten-episode drama premieres in India exclusively on HBO Hits on Saturday, August 9 at 7 pm. New episodes will air every Saturday at 8:30 pm. The series is also available free on HBO ON DEMAND on Tata Sky.