General Elections 2019 - The picture so far!

The election is conducted via electronic voting and VVPAT evidencing across more than 1 million polling stations. 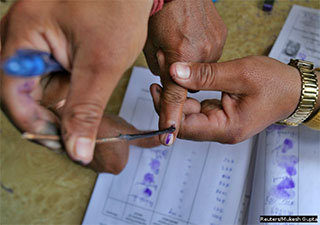 As of May 06, five rounds of Lok Sabha Elections 2019 have been completed. Technically, the fate of nearly 75% of the Lok Sabha seats is voted and locked up in ballot boxes. With two more rounds to go and the final counting on May 23, where does India stand in its largest democratic exercise?

Elections in India can be weirdly complex
Firstly, the numbers are humongous. There are more than 90 crore eligible voters in India in 2019 and if Indian voters were a nation then it would be the third most populous nation after China and India (not counting Facebook). The election is conducted via electronic voting and VVPAT evidencing across more than 1 million polling stations. The Election Commission uses every possible mode of transport including bullock carts and elephants to reach remote places. In fact, in the Gir Forest in Gujarat, has a polling station just to facilitate one voter. The Election Commission has to deal with 22 official languages, 200 regional languages and 6,200 dialects. Overall costs can be gigantic. The Centre for Media Studies estimates that the Election 2009 cost $2bn while the Election 2014 cost $5bn. The current election of 2019 is likely to cost $10bn, at the very least.

Phases are gone and phases to go
As of the end of May 06, five out of the seven phases have been completed. The first real indication of the election outcome will only be known when the exit polls are undertaken after the seventh round of voting. While the voting percentage overall has been at an all-time high of around 67% till date, some of the metropolises like Mumbai really disappointed with the voting percentage of just above 50%.

Factors that will determine the outcome on May 23, 2019

While there are opinions galore about the likely outcome, there are five factors that could have a major impact on how the results pan out. Let us look at the drivers.

a) The incumbent Modi government had some hits and some misses too. While it has delivered on national security, GDP growth and government spending; there have been gaps in improving rural income, creating jobs, remunerative farm prices, etc. While demonetization and GST were optically great, people are yet to see the visible benefits of the move. These will remain key issues as people go to vote.

b) It is still not clear whether the confusion in the “Mahagathbandhan” ranks will benefit the ruling combine or not. While the opposition was supposed to put up a united front against the ruling government, the opposition is very often splintered and squabbling over internal issues. That has not been really useful in building the confidence of voters. Voters also complain about the uncertainty over who will be the supreme leader if the Mahagathbandhan is voted to power.

c) Has Modi turned the tide of state assembly losses? At this point in time, there are no clear answers. The BJP performed below expectations in Gujarat and Karnataka and lost to the Congress in their traditional bastions of Madhya Pradesh, Chhattisgarh and Rajasthan. However, the Pulwama attacks, the spirited military response at Balakot and some deft chest-thumping are believed to have led to a major wave in favour of the BJP government. A lot will depend on whether this wave actually translated into votes.

d) Will farm distress and the resultant ire at the state levels extent itself to the central level too? This is a major X-factor which even the current government does not have clear answers. The BJP had to face setbacks in rural Gujarat, Madhya Pradesh, Rajasthan and Chhattisgarh purely due to farm distress. The negative impact of rural votes was quite powerful as the farmers held the states squarely responsibly. It remains to be seen if central voting is ring-fenced from farm distress?