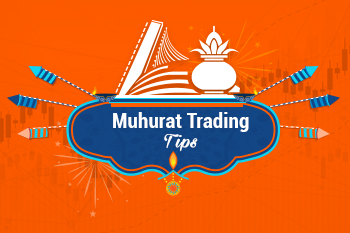 Muhurat trading tips for this Diwali

We cover three sectors to buy into and one big sector to avoid, even as global and domestic cues weigh in on the markets.

Muhurat trading 2075 begins even as weighty news flow in on the global and domestic front. On the global front, oil prices are higher than last year and the US and China are still refusing to back off from a full-blown trade war. What’s more, the US has gone ahead and re-imposed sanctions on Iran, effective from November 5. This move will most certainly put India in a piquant situation, as our country is one of the leading importers of Iranian crude. Further, a build-up of geopolitical risk in the Middle East and Italy has been threatening to disrupt the European common currency with its profligate ways.

Cues on the domestic front are not too encouraging either. The IL&FS default has placed the entire NBFC community in a sticky situation; due to the meltdown, these companies are facing a tough time raising money. The trade deficit and current account deficit are reaching worrisome levels. The rupee has weakened, trading near 74/$ levels, while the bond yields crossed the 8% mark. In the midst of all this, there are some serious concerns over corporate governance in India. It is against this background that Muhurat trading will be conducted for Samvat 2075. So, do you need to tweak your strategy? We cover three sectors to buy into and one big sector to avoid. 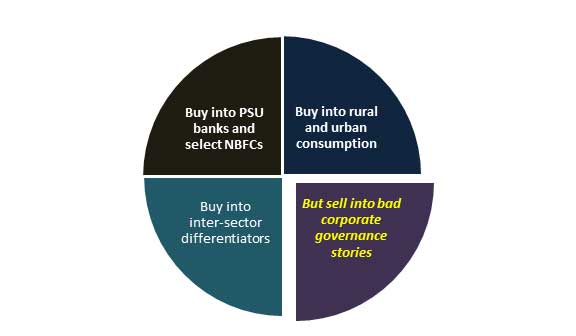 Consumption companies, especially those dealing in the FMCG and two wheelers sectors, have a lot going for them. Price wars are over, and top-line growth is finally improving, touching double digit rates. Implementation of GST has added that extra layer of alpha in these stocks as it will probably substantially improve their allocation efficiency in the coming years. GST has been very favorable to food companies, and these are likely to thrive, notwithstanding their richer valuations. Within consumption stocks, you must look at sub-themes like rural consumption. With MSP fixed at an assured 150% of the cost of production and MSP benefits extended to rabi crops too, there is going to be a substantive shift in rural purchasing power. Consider focusing on companies that deal on the input-end, such as hybrid seeds, agrochemicals, fertilizers, and drip irrigation, among others. Further, the secondary demand for sectors like FMCG, white goods, and two wheelers will also be in focus. The real traction could be at the convergence of rural demand and consumption.

Sounds a tad hard to believe, but PSU banks could be the surprise package for the next year. There are quite a few positives to be considered. Profitability and growth are back as signified by the quarterly numbers of Union Bank and BOB. Additionally, the NCLT will most probably deliberate to write-back nearly Rs1 lakh cr for Indian banks in the form of money recovered from defaulting companies via the IBC mechanism. This could be a big boost for NBFCs, having a multiplier impact on credit creation. You need to be a little more discerning with respect to NBFCs. Focus on consumer finance companies that could probably be the leaders of the consumption demand success story. Also, they have less to worry about on the maturity mismatch front.

Buy into the intra-sector differentiators for value expansion

What is an intra-sector differentiator? There are companies within the same sector, which are performing on a different set of economics altogether. Within NBFCs, there are those that fund long-term assets with short-term borrowings. That is a balance sheet limitation. However, there are scores of NBFCs that borrow and lend at the short end only. Businesses like that of IL&FS are preparing for a disaster. Within real estate, there are companies that are hungry for cash and also companies that are reducing their debt. This is the time to be selective as you are not only playing on performance but also on the relative re-rating of these stocks. The differentiators could be the big story for Samvat 2075.

During the last one year, one thing was certain: The market will punish any company that showed laxity in corporate governance. Whether it be the group company shenanigans of IL&FS, poor disclosure practices of Infibeam, the deteriorating working situation of Manpasand Beverages, or the dubious investments of Vakrangee, the market is going to be ruthless. Don’t even try to do any type of value-digging in these companies. Most of the stocks enumerated above have lost over 80% of their value in no time, and even from these levels, value destruction could be immense.

As muhurat trading heralds a new Samvat 2075, don’t just go for the stop tips and trading ideas. Look for stocks that fit into these themes. Do this and you could be truly laughing all the way to the bank by the time Samvat 2076 commences!