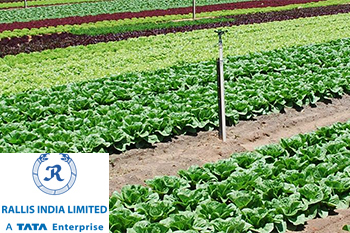 Rallis India Limited, a TATA Enterprise and a leading player in the Indian Agri inputs industry announced its financial results for the quarter and period ended 30 September 2021.

Announcing the results, Mr. Sanjiv Lal, Managing Director and CEO, Rallis India said,“The erratic monsoon season this year was not favourable to agri input companies in the last quarter. In this backdrop, our domestic crop care business grew by 3%, but the seeds business declined by 65%. The drop in the seeds business was due to the changes in cropping patterns witnessed across the country as well as the proliferation of spurious cotton seeds. The overall good cumulative rainfall witnessed in Kharif also augurs well for the upcoming Rabi agricultural season.”

Meanwhile, the Company's efforts towards dealing with logistic issues helped in exports delivering growth of 22% during the quarter. The raw material situation continues to be tough and we are focussed on minimising the disruptions to our production as much as possible.”

“On a longer term basis, our capex plans, new product introduction plans, and demand generation investments remain on course as we do believe that normalcy will be restored progressively. While positioning ourselves so, we are also consistently prioritising the safety and well-being of all our employees and other stakeholders,” Sanjiv Lal added.