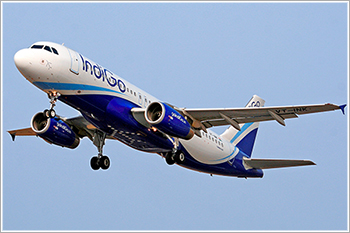 American Airlines is opening new doors across India this fall thanks to a new codeshare agreement with IndiGo, India’s leading airline. The agreement, announced today, will place American’s code on 29 of IndiGo’s domestic routes in India, providing a convenient option for American Airlines customers arriving on the carrier’s new Bengaluru (BLR) and Delhi (DEL), India, flights.

The codeshare, which will require U.S. and Indian governments’ approvals, is expected to begin in October, as American launches new service between New York (JFK) and DEL on Oct. 31 and between Seattle (SEA) and BLR on Jan. 4, 2022.

Vasu Raja, Chief Revenue Officer, American Airlines said, “We’re eager to add IndiGo as our trusted partner in India,” said. “Whether our customers are traveling for business or pleasure, this new partnership makes it easy to reach all four corners of India. Today we’re adding 29 new routes to our map as a result of this agreement, providing customers with even more options around the globe.”

Ronojoy Dutta, Chief Executive Officer, IndiGo said, “We are delighted to sign this codeshare agreement with one of the world’s largest and most reputed airlines. We are confident that this will be a strong partnership that will create many opportunities for trade and tourism through IndiGo’s seamless nationwide connectivity. We look forward to having American’s customers on our lean clean flying machine, as we extend to them our on-time, affordable, courteous and hassle-free travel experience.”

IndiGo, India’s largest airline by number of passengers carried, is based in Gurgaon, Haryana, India. With its fleet of 275+ aircraft, the airline operates more than 1,100 daily flights, connecting 70 domestic destinations and 24 international destinations. Since its founding in 2006, IndiGo’s 23,000 employees have professionally served more than 300 million customers.

Unwind before taking off

Customers traveling in American’s Flagship® Business cabin on DEL–JFK or BLR–SEA will have access to IndiGo partner lounges in their originating city where they can relax, unwind and enjoy hot food, beverages, Wi-Fi and more. Customers can learn more about lounge locations and offerings on the IndiGo website.