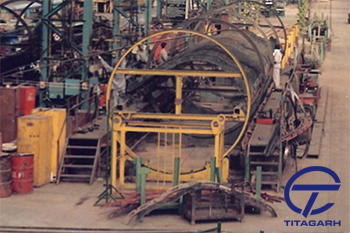 Titagarh Wagons Limited (TWL) has announced the induction of two new members to its Board. Accepting the recommendations of Nomination and Remuneration Committee (NRC), the Board has appointed the new directors as Additional Directors with effect from January 01, 2020 who will hold office upto the date of next Annual General Meeting whereat their appointment will be placed for approval of the shareholders.

Sushil Kumar Roongta appointed as an Additional Director (Category: Independent), an Electrical Engineer from BITS, Pilani and PG Diploma in Business Management (International Trade) at 70, has a long illustrated background with about 50 years of experience. He was the Executive Chairman of SAIL (Steel Authority of India Limited) during 2006-2010 before joining Vedanta Group in 2011.

He has served as the Chairman, Board of Governors, Indian Institute of Technology (IIT), Bhubaneswar and as Chairman of Panel of Experts on Reforms in the Central PSEs constituted by the then Planning Commission and ‘Roongta Committee Report’ is generally taken as a benchmark for CPSE reforms. Roongta presently Chairman of BALCO also serves as Director on the boards of several reputed companies.

J P Chowdhary, Executive Chairman of TWL said “I am very happy that Roongta is joining our Board and am sure that TWL will immensely benefit from his rich experience and expertise in the coming years. It is my pleasure to welcome Roongta to the Board of TWL. This development coincides with onset of the New Year and extending my best wishes to all, I firmly believe that 2021 is going to be positively better than the year that just went by in all respects.”

Umesh Chowdhary, Vice Chairman and Managing Director of Titagarh said “ Roongta with a vast reservoir of knowledge and experience strengthens the Board of TWL more so particularly at this stage when the Group has not only consolidated its position in Freight and Passenger Rolling Stock but is also poised to make its presence count in other exciting verticals viz. Electricals and Propulsion and Bridges, Shipbuilding etc. I look forward to guidance of Roongta on the Board as Titagarh progresses on the way to achieving greater heights in future.”

Prithish Chowdhary, son of Umesh Chowdhary, a qualified International Baccalaureate from Le Rosey Institute, Geneva (Switzerland), at 19 brings young blood to the Board of Titagarh as Non-Executive Director with effect from January 01, 2021. He has in the past couple of years already gained insight into the business areas in which Titagarh is present and is determined to translate his futuristic and exciting ideas for growth of the Group into action under the able leadership of now a better balanced Board of Directors.

Mr Manoj Mohanka, Chairman of the NRC said that “Prithish has been a quick learner, extremely keen observer and his joining the Board will provide a young and welcome modern perspective. It will also prepare Prithish to take up larger responsibilities in the Group in the coming years.”

Titagarh also announced induction by its wholly owned subsidiary –Titagarh Firema SpA, Italy (TFA) of Enrico Grigliatti as Managing Director & CEO of TFA, w.e.f. 29th December, 2020, in place of Luigi Corradi who has moved onto another challenging role as CEO of a Government owned enterprise in Italy. Further, Fabrizio Zamagni has been appointed as General Manager of TFA by the Board of TFA.