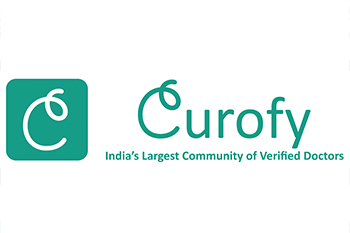 There are only few things that have not been affected tremendously by digitisation. One such sector is healthcare. Particularly in India, digitisation faces a stiff resistance from healthcare sector. There are many reasons underlying this resistance, the most ubiquitous of all was the inertia of doctors, the ultimate care providers, to adopt digital media. This particular reason is behind the slow penetration of digital media in healthcare world. Since it is a fledgling space, many look at it as a yet unexplored opportunity, but only a few have been able to establish a prominent stature.

One such prominent venture was started by three IIT Delhi alumni that streamlined the peer to peer communication among doctors without entailing any kind of risk. This venture is called Curofy. Curofy was started with a powerful dream - to penetrate the healthcare sector through innovative digital measures. It was an uphill task to say the least. The risk entailing nature of healthcare sector certainly proved to be an impediment at early stages. But, the founders looked at the impediments as voids that can be filled with innovative measures. The result - they have been more than successful to develop an engaging platform exclusively for doctors.

The three co-founders - Mudit Vijayvergiya, Nipun Goyal and Pawan Gupta wanted to start something of their own and were part of different initiatives at college. The idea sprouted over a cup of coffee during their final year (2012) and everyone agreed to it readily. Their first footprint in the healthcare sector was in the form of a medical tourism company. The business was lucrative and offered good margins too; all they needed was to bring overseas patients. While working for the same they came across a problem that was a pretty tough nut to crack- connectivity among the doctors was extremely inefficient. It was then that they dropped that venture, took jobs with MNCs and continued researching about the concept of medical networking in India. Till May 2014, they met more than 1,000 doctors and the need was evident.

Soon, the urge and necessity to create an exclusive network of doctors let them leave their jobs and start with Curofy. The initial route that they undertook was that of a website, but sooner rather than later they realized that mobile is the way to go. After they received feedback of first 1,000 doctors that they reached, it became clear to them that it is crucial to develop a mobile-based application for further operations. Post this, they came out with an app only platform. In January 2015, they started alpha phase of the mobile app to receive user feedback and launched it on Play Store in early Feb. Now they have 2,00,000 doctors on the App.

Curofy's first and foremost priority is to create engagement among doctors in India. They target to reach out to over 70% of 1 million+ Indian doctors in the next couple of years. While penetrating deeper into the Indian doctor community is a core focus, with time they shall also expand globally with the help of local channel partners.

Curofy was built to enable doctors to provide coordinated care to patients by keeping them abreast with latest medical advancements and providing them access to all the healthcare industry stakeholders. In essence, Curofy wants to be the digital world for doctors and in doing so it can be the ultimate channel for the stakeholders for reaching out to the doctors. By 2020, it not only visualizes to be an integral part of the $280 Bn Indian healthcare industry but also to become a major player in the global healthcare scene.

“Professional learning and networking is the need of the hour in any field. With excellent UI/UX Curofy provides a much desirable opportunity for doctors to get quick opinion on complicated patient conditions along with peer to peer Alma matter transfer" said Rinkesh Shah, Digital Marketing, GSK.

In September 2015, Curofy raised undisclosed amount pre-series A round from a Seattle-based healthcare VC, Round glass partners, a major chunk of which has been invested in product development, marketing, and hiring resources.

One of the key problems that they are solving for the healthcare industry is creating a supply of online doctors. Curofy's robust tech platform ensures that it is global ready. Curofy is creating a network of online active doctors in India but has the potential of creating a global network. It has the potential to truly bring to life the concept of doctors without borders. True collaboration can eradicate diseases, epidemics with experiences shared across the borders. It gives the entire healthcare industry an opportunity to interact with the global audience on a single platform. It can save the industry millions of dollars on doctor outreach and infinite other options.

"Curofy is an essential app for doctors. With changing technology doctors are also going digital. It is a good way for communication. In all practical sense it has opened up borders geographically and between specialties to facilitate an exchange of views. It is the bridge between doctors from peripheral and urban areas. I like to interact with the younger generation of doctors and educate them from my experience" said Dr. Rajesh Puri, Director Institute of Digestive & Hepatobiliary Sciences, Medanta - The Medicity.

There are countries in the world with meager resources. And there are countries who have ample resources and medical personnel. Curofy can be that bridge where doctors from all walks of life and the world can aid the needy. Curofy has the promise of reshaping the entire healthcare ecosystem by building a network of healers, thus empowering doctors to move beyond their boundaries and borders and explore. This certainly is a good news for everyone.

Curofy's target is to reach out to over 70% of 1 million+ Indian doctors in the next couple of years. While penetrating deeply into the Indian doctor community is a core focus, with time they shall also expand globally with the help of local channel partners. Their global aspiration is to become the market leaders in 4 different countries if not more. They also envisage being market leaders in India and attaining self-sustainability.