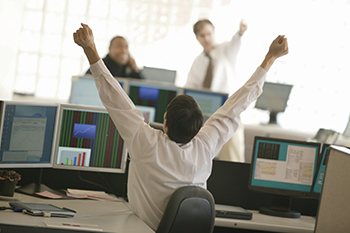 The benchmark Sensex and Nifty were trading in green during Thursday's trading session after major IT companies like Mindtree, Infosys and Wipro logged higher profits in their books during June 2020 (Q1FY21) quarter which was expected to be worst hit from Covid-19. That said, there was huge buying also witnessed in IT stocks subsequently.

Here's the list of bulls and bears of the day on Sensex.

Nestle India: Surging by 3.55%, the stock was trading at Rs17505 per piece. The company has launched a virtual internship programme 'Nesternship' for young professionals.

Kotak Mahindra Bank: Trading at Rs1,326.90 per piece, the stock was above 2.84%. In its annual report, Kotak said, "The Bank continues to reimagine sales, service and processes with an increased focus on digital channels." Adding it said, "

IndusInd Bank: The stock jumped by 2.85% and was trading at Rs517.85 per piece. IndusInd Bank has announced its successful integration with CRMNEXT, the leading enterprise solution provider for banks and financial services.

Tech Mahindra: Down 2.42%, the stock was trading at Rs600 per piece. The company's 33rd AGM of the members is scheduled on Tuesday, the 28th day of July 2020 at 3.30 p.m. IST through Video Conference/Other Audio-Visual Means.

ITC: The stock was performing at Rs194.40 per piece, lower by 2.07%. According to the Hindu BusinessLine report, ITC as a part of ramping up production of its Mangaldeep brand of agarbattis (incense sticks), is working with farmers on growing bamboo plantations in the North-Eastern state of Tripura.

NTPC: The stock was trading at Rs86.85 per piece, down by 1.31%. NTPC entered into a Memorandum of Understanding (MoU) with National Investment and Infrastructure Fund (NIIF) to explore opportunities for investments in areas like renewable energy, power distribution among other areas of mutual interest in India.

Power Grid: The stock was down 0.92% trading at Rs162 per piece. In a filing to exchanges, Power Grid said, "This is to inform that the provisional demand notices towards License Fee including interest, penalty and interest on penalty in respect of NLD & ISP licenses pertaining to FY 2006-07 to FY 2018-19 reported vide our letters referred above have been withdrawn by the Department of Telecommunications".