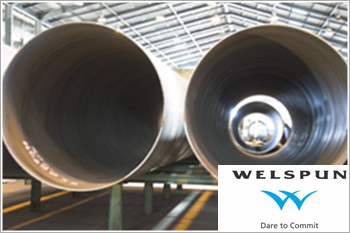 Welspun Corp was in a sharp rally on Wednesday after the company raised funds due to the sale of Plates and Coil Mill Division and also bagged multiple orders. On Sensex, the company's stock has clocked a new 52-week high of Rs165 per piece in early deals. The stock trades near the record high.

In its regulatory filing, on Tuesday, the company said that it has received multiple orders of approximately 164 KMT valuing close to Rs1,725cr. With these orders, the Company’s order book stands at 525 KMT valued at approximately Rs4,800cr, after considering execution up to May 2021.

Welspun said, "We are pleased to inform that since our last announcement, we have received multiple orders of approximately 164 KMT valuing close to INR 1,725 Crore. These include reinstatement of an offshore sour pipes supply contract (270 km / 87 KMT) in Australia for the Barossa Offshore Development Project."

Further, that day, Welspun announced that the company has received a further Rs498.50cr for the sale of Plates and Coil Mill Division to JSW Steel.

Earlier, the company had highlighted that an amount of Rs225cr has been received from JSW Steel on April 30 this year.

Welspun has now received Rs723.50cr for the sale of Plates and Coil Mill Division. The total transaction values to Rs848.50cr under the business transfer agreement between Welspun and JSW Steel.

Welspun said, "The balance consideration, subject to closing adjustments for net working capital will be received on fulfilment of regulatory approvals and payment milestones as provided under the BTA."