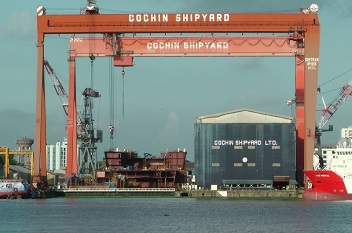 The Minister inaugurated the launching function of three Floating Border Out-Posts (FBOP) for the Border Security Force and two Fully Electric Autonomous Ferries for ASKO Maritime AS, Norway, which are amongst the world’s first Autonomous Ferries.

Union Minister for Ports, Shipping & Waterways and AYUSH, Sarbananda Sonowal has inaugurated the simultaneous launchingof five vesselsat Cochin Shipyard Limited (CSL). The Minister was in Kochi on a threeday visit, his first to the PSU after taking charge of the ministry. The vessels were launched by five seniors most women employees of CSL.

The Minister inaugurated the launching function of three Floating Border Out-Posts (FBOP) for the Border Security Force and two Fully Electric Autonomous Ferries for ASKO Maritime AS, Norway, which are amongst the world’s first Autonomous Ferries.

The Minister lauded CSL for its efforts on contributing towards technological and sustainable solutions for the shipping industry. He also appreciated CSL on the construction of the country’s first-ever Indigenous Aircraft Carrier (IAC), INS Vikrant which is currently commenced its second sea trials, after a highly successful first sea trial.

Sonowal boarded the IAC during the course of the sea trials yesterday along with the Chief of Naval Staff, Secretary, MoPSW, Addl. Secretary, MoPSW and CMD-CSL to witness and review the progress made on this crucial and strategic national project. The success of the sea trials of the IAC is a true reflection of our Nation’s quest for ‘Atma Nirbharta’, the Union Minister said. The Minister complemented CSL, Indian Navy, the various OEMs and all the stakeholders involved in the project for this achievement.

The IAC is the largest warship built in the country having a displacement of about 40,000 tonnes. The ship is a mammoth steel structure of 21,500 tonnes of special grade steel developed indigenously and used in Indian Naval Ships for the first time. The enormity of the ship can be gauged from the appx 2000 kms of cabling, 120 kms of piping and the 2300 compartments available onboard. The shipyard carried out the detailed engineering of the ship using advanced software which enabled the designer to get a complete 3D view of the compartments of the ship. It is the first time in the country that a ship of the size of an Aircraft Carrier has been completely modelled in 3D and production drawings are then extracted from the 3D model.

The vessel is powered by four gas turbines in a COGAG (Combined Gas and Gas) propulsion configuration. The IAC is equipped with numerous high end technologies including network centric distributed data processing & control systems, intricate Aviation Facility Complex, the state of the art weapons and sensors and also has one of the most powerful propulsion and power generation & distribution (PGD) systems to be installed on board any ship to be built in India.

Construction of the IAC has contributed immensely to the Indian economy as it generated a demand in both the upstream industries such as steel, electro mechanical machinery equipment and also for downstream sectors such as infrastructure and services. This has led to growth in indigenous design and construction capabilities besides development of large number of ancillary industries, with employment opportunities for 2000 CSL personnel and about 12000 employees in ancillary industries

The Union Government is extending all support to the yard in its endeavours on geographical expansion and capacity enhancement. Through the Maritime India Vision 2030 the Government aims to make India a sought after destination for ship building and ship repair. CSL is a major partner in this endeavour” Union Minister Shri Sarbananda Sonowal said.

The Minister inaugurated ‘Smrithi’, the Ship Model Room at CSL premises, which portrays 50 years of CSL’s rich history. Smrithi exhibits the major vessels built by CSL over the past five decades. A Coffee Table Book based on CSL’shighly recognized CSR initiatives was also released by the Minister.

During the visit, the Minister conducted a review of the yard’s performance and visited the Ship Building and Ship Repair facilities of CSL. The Minister also had a look at the International Ship Repair Facility being set up by CSL at Willingdon Island, Kochi.