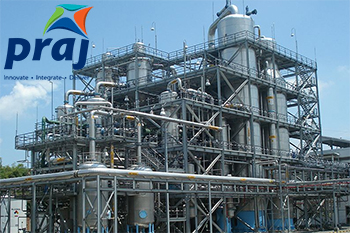 Praj's BIOSYRUP to enable year-round production of ethanol to boost the sugar sector; Stock ends 4% up

Praj has developed a patented technology to process cane juice into conditioned BIOSYRUP that has storability of upto 12 months.

Praj’s commercial demo facility for production of Ethanol from BIOSYRUP has been successfully implemented in Jaywant Sugars. BIOSYRUP was stored for the period of one year and no sugar loss was observed even after the period of 12 months. The technology has been validated and certified Vasantdada Sugar Institute (VSI)- India’s premier sugar research institution.

Shekhar Gaikawad, Commissioner of Sugar said, “Currently India has a surplus sugar production of 6 MMT which blocks the liquidity of sugar mills for 18 to 24 months. Diverting sugarcane juice to ethanol production is the only sustainable way forward for sugar mills in the long term. I congratulate Team Praj for achieving such a great milestone which I am sure will become game changer not only in domestic but also in global sugar sector at large.”

Following its launch last week, BIOSYRUP is catching attention from non sugar states around the nation in addition to sugar industry and is seen as a milestone in evolution of India’s ethanol industry in its growth journey.