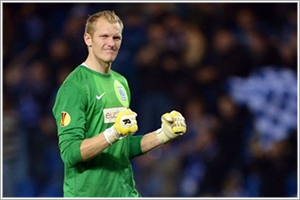 With the signing of Van Hout, the New Delhi based club has made a fine addition to one of the most vital positions in football. At 6ft10 (2.08m), he also has the distinction of being the tallest professional football player in the world, making him an imposing figure at the goalpost. At the age of 27, he is at the peak of his footballing prowess and will have plenty to offer to the club.

Van Hout burst on to the scene in 2008, becoming the hero of Kortrijk after saving three penalties in the shootout against league champions Standard Liege to help his team progress to the Quarterfinals. This earned him a transfer to none other than Standard Liege itself, with whom he won the Belgian Cup in 2010-11. Van Hout was on the bench for Liege’s matches in the Champions League, including two games against Premier League giants Arsenal.

In 2012, Van Hout made the move to another Belgian superclub, Racing Genk, one year after the club sold prodigious talent Thibaut Courtois to Chelsea. That season, Van Hout led Genk to a 3rd place finish in the Pro League, earning them a place in the Europa League. He also won his second Belgian Cup.

Van Hout will arrive in Delhi fully fit and raring to go. He featured in the Europa League for Genk as recently asFebruary 27 of this year, playing the full 90 minutes against Russian club, Anzhi Makhachkala.

Commenting on his inclusion in the Delhi squad, Van Hout said, “I am eagerly looking forward to playing in India, which has a sizeable fan following for the game of football. I am confident that it will be an enjoyable and fruitful experience to play in Indian conditions.”

On Van Hout joining the team, Delhi Dynamos FC Coach Harm van Veldhoven said, “Van Hout is a seasoned player, who has contributed immensely to his teams in the past due to his fine goalkeeping skills. We are sure that he will display the same alacrity and judgement when defending Delhi Dynamos’ goalpost. His height is a big advantage, especially in close games that go down to penalty shootouts.”

Kristof Van Hout has added to the already impressive line up of international talent assembled at the Delhi Dynamos under the guidance of fellow countryman Harm van Veldhoven. The club has signed prolific strikers Mads Junker and Morten Skoubo, as well as experienced Belgian defender Wim Raymaekers following their strategic tie up with Feyenoord Rotterdam.

Largest Subscriber Base amongst all Cable Players in India
DEN Networks Limited is India's largest cable TV distribution company serving 13 million homes in over 200 cities. The company has been a frontrunner in the digitisation of Indian cable television and has approximately 6 million digital subscribers.

Redefining football culture in Delhi
DEN is the proud owner of the Indian Super League’s Delhi Team – Delhi Dynamos FC.  DEN aims to create a robust football ecosystem in Delhi & Northern Indian. Delhi Dynamos has an alliance with Feyenoord Rotterdam – a leading football club & academy from the Netherlands.According to the CIES Football Observatory,Feyenoord is the World No. 1 in Player Development for this FIFA World Cup 2014.

With the introduction of Delhi Dynamos FC, DEN aims to become the default destination for entertainment, information and interactivity for the Indian family.