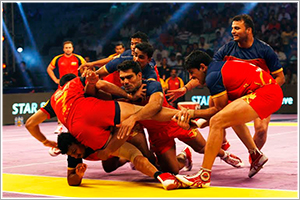 Pro Kabaddi: Pune snatches victory from the jaws of defeat

They whistled and jeered when the Bulls were on the attack, even if luck hadn't been on their side, Pune at least seemed to have found a home away from home.

It was set to be a momentous clash between the second placed Bengaluru Bulls and Puneri Paltan. A victory for Bengaluru would help them close in the gap between them leaders U Mumba, While Pune stood the chance of leapfrogging both Patna and Delhi if they were to win. The air was thick with anticipation as both teams geared up for a showdown.

The match began with Bengaluru moving into an early lead thanks to the heroics of star raider Ajay Thakur and Captain fantastic- Manjit Chillar, who strung together a series of successful raids, and helped the Bulls put some vital points on the board early on. Pune who desperately needed a win if they had any hope of mounting a serious challenge in the league rotated raiding duties between skipper Wazir Singh and Jitesh Joshi to great effect, as they managed to keep pace with the Bulls early on. Over the course of the league, Bengaluru have never lost a match from a winning position and the Paltans were well aware of that. But it wasn't long before the Bulls started to flex their muscle; by the end of the first half the Bulls led the Paltans in every department. They had a higher number of productive raids, a greater number of tackles, 2 sets of Lona points to Pune's none and the most important of them all, the scoreboard too.  The Bulls marched into the half-time break in the lead 20-15.

Having been disappointed by their team's loss in the opening game of the Delhi leg, the Delhi crowd seemed to favour the Paltans, constantly cheering them on through every raid and every tackle. They whistled and jeered when the Bulls were on the attack, even if luck hadn't been on their side, Pune at least seemed to have found a home away from home.

It was a close match, with Pune always behind, the only way Pune could stop the Bulls was to stifle the threat presented by Manjit Chillar and Ajay Thakur. It looked agonizing for the Paltans as every time they came within reach of the Bulls, they would fall behind again. Puneri Paltan's best chance to reverse their fate came late; the 34th minute of the second half with the score at 26-23, Pune had successfully dispatched Ajay Thakur.  Coach Ramphal Kaushik realized the importance of the moment and called for two timeouts back to back, reemphasizing the importance of dismissing Manjit Chillar.  Like a wish granted from the heavens, Manjit was sent back to the out box on the very next raid, given that he'd had three consecutive empty raids.

Pune seized the opportunity and for the very first time in the match went level with the Bulls. There was suddenly a strong belief within the team that they could win the match, and with one last crunching challenge on the Bengaluru skipper, the match was over. Pune had literally rescued the match from the lion's mouth in the very last minute. Their maiden victory, Pune won the match with a score of 33 - 31 in their favour.