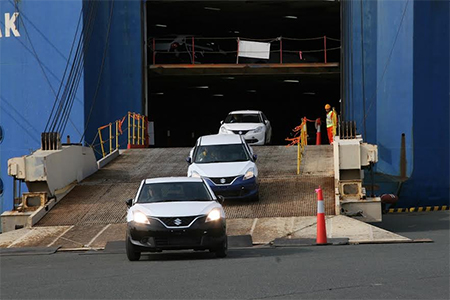 Early this year, the Company’s premium hatchback Baleno, manufactured exclusively in India, became the first car to be exported from India to Japan.  The Company started exports to Europe in 1987-88, when a small number of cars were sent to Hungary. Thereafter, exports have grown at a steady pace, as new models and markets were added from time to time. Although exports business is inherently subject to economic and policy changes in the destination countries, the Company has been able to maintain an upward trend in exports over the years. Maruti Suzuki’s blockbuster hatch Zen, India’s world car of the 1990s, took the Company to many new markets. Exports were bolstered also by the iconic Maruti 800 and later, A-Star. India’s most popular car brand for over a decade, Alto, also has a sizeable presence in the export markets, having clocked over 3,90,000 sales cumulatively. Read More

Jaguar launches the All-New XF in India starting from Rs.49.50 Lakh
Jaguar Land Rover India announced the launch of its most dynamic premium business sedan, the all-new Jaguar XF, starting from ₹ 49.50 Lakh (ex-Delhi). The deliveries of XF are scheduled to begin from end of September 2016 and customers can now book one through any of the 23 authorised Jaguar Retailers located near them. With the introduction of the Ingenium Diesel engine, the XF becomes the first Jaguar in India to get this much awaited power-train. Rohit Suri, President, Jaguar Land Rover India Ltd (JLRIL), said, “Over the years, Jaguar XF has gained immense popularity and success in the Indian market and we are excited to offer the all-new Jaguar XF to our discerning and distinguished customers passionate about owning a Jaguar.” Read More

S. Manikandan, the 38-year old MBA, has been working on this project for more than 3 years & just launched his 2nd crowdfunding campaign on Fueladream – the Bengaluru based crowdfunding platform, which curates and presents unique ideas and innovations of this kind. Besides just contributing to this project, the Funders can pre-order the SPERO E-bike through Fueladream.com. Read More

Tata Motors and Castrol have a long and enduring relationship of over three decades and have worked closely together to deliver high performance products and outstanding services for Tata Motors customers. In the passenger vehicle segment, Tata Motors and Castrol have worked together to co-engineer dedicated products to suit the requirements of the passenger vehicle range, including the recently launched, Tiago. Read More

The inspection and subsequent rectification will be carried out free of cost for all New Generation Scorpio & NuvoSport customers, who will be individually contacted by the company. As an endeavor to ensure a hassle free experience for its customers, the company is proactively carrying out this activity. This action is also in compliance with SIAM's voluntary code on vehicle recall.

Customers can also visit the website (Service Action section) and check if their vehicle is part of the service action.

Auto Industry committed to meet timelines for BS IV and BS VI Emission Norms
Indian auto industry is committed to meet the challenge of achieving to BS VI emission norms by 2020. The target is very stiff but the auto industry has accepted the challenge in view of the rising concerns on vehicular pollution, especially in the urban metros. This was stated by Vinod Dasari, President, SIAM in a press note issued. “India has been the fastest at adopting new safety and emission norms.  This leap frog would make India the first country in the world to accomplish such an accelerated progression in vehicular emission norms” Mr Dasari added. This would not only entail a significant telescoping of long term investments into a much shorter timeframe of 3-4 years, but also deployment of a much larger technical resource drawn from world over to enable compression in the time taken for technical development, testing and validation of the vehicles in Indian conditions. Read More

Audi partners with Airbnb with all new Audi A8 at Emmys
Audi of America returns for the sixth consecutive year as the official automotive sponsor and vehicle provider for the Television Academy 68th Annual Emmy Awards. As the official vehicle of the Emmy Awards, the 2017 Audi R8 will make special red carpet appearances throughout September, including during the annual “Audi Celebrates the Emmys” event on Thursday, Sept. 15 in Los Angeles. This year’s campaign will also feature an exclusive collaboration with Airbnb, offering fans the opportunity to book a once-in-a-lifetime travel and driving experience complete with a stay at a famed luxury residence and a weekend with the all-new Audi R8 supercar. “Once again, Audi is honored to support television’s brightest stars during its biggest night,” said Loren Angelo, Vice President of Marketing, Audi of America. “What better stage to introduce our marketing partnership with Airbnb than the Emmys. Pairing an acclaimed and architecturally stunning home with the award-winning Audi R8 offers fans the chance to experience the ultimate full-throttle driving fantasy.” Read More