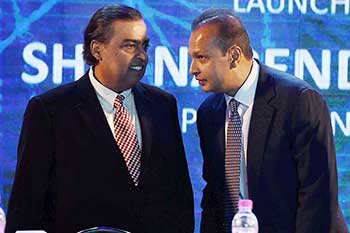 Shares of Anil Dhirubhai Ambani Group’s cheered on Tuesday morning after brother Muskesh Ambani helps him to clear Ericsson dues by paying ~Rs460cr for Reliance Communication a day before the four-week deadline set by the Supreme Court to clear dues expires.

Accordingly, the share price of Reliance Communications spurted 10% followed by Reliance Capital, Reliance Power, and Reliance Naval and Engineering which gained 5% each on the BSE.

"The requisite payment of Rs550cr and interest thereon to Ericsson has been completed today in compliance of the judgment of the Hon'ble Supreme Court," Rcom said in a press note after markets hours to the exchanges on Monday.

"My sincere and heartfelt thanks to my respected elder brother, Mukesh, and Nita, for standing by me during these trying times, and demonstrating the importance of staying true to our strong family values by extending this timely support. I and my family are grateful we have moved beyond the past, and are deeply grateful and touched with this gesture,” Rcom said in a press note citing Anil D Ambani, Chairman of the company.

Last month, the Supreme Court had held Anil Ambani in contempt for not paying Ericsson's dues despite promising to do so. It had also threatened to send Ambani as well as Chhaya Virani and Satish Seth - chairmen of two RCom units, to jail if they fail to pay the dues in four weeks.