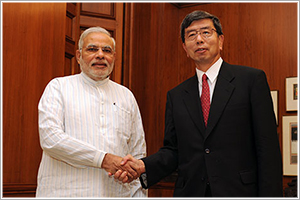 Mr. Nakao said ADB’s operations for India will maintain high levels of lending, amounting to a total of $7 billion-$9 billion over the next three years. ADB will also provide around $30 million for technical assistance grants, especially for building institutions and capacity at the state and local levels.

Mr. Nakao applauded the government for presenting a growth-oriented budget, while committing to a path of fiscal consolidation. Going forward, he said, “It is essential to increase capital expenditures as a ratio to GDP, enhance tax revenues through tax reforms such as the introduction of Goods and Services Tax and stronger tax collections, and streamline subsidies by better targeting.” He also encouraged the government to continue the prudent economic management for lower inflation and stable rupee. ADB forecasts the Indian economy will grow at 5.5% in FY2014 (ending 31 March 2015) and expand further to 6.3% in FY2015. 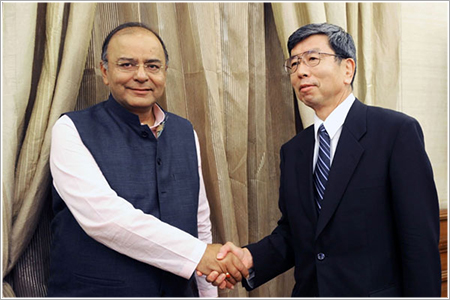 Asian Development Bank (ADB) President Takehiko Nakao met with India’s Finance Minister and ADB Governor Arun Jaitley
“To get back to a high growth path of 8 to 9%, it is also crucial to implement investment-friendly reforms being initiated by the government,” stated Mr. Nakao. Easing the regulatory burden on industry by eliminating red tape and promoting inter-agency coordination, enabling single window clearance mechanisms, and reviewing land acquisition procedures should be part of the national strategy to attract local and foreign investors. Together with efforts to build world class infrastructure and skills, these steps would create the job opportunities needed to absorb India’s youthful and growing labor force and ensure that growth is inclusive.

Mr. Nakao told Indian leaders that infrastructure development would remain the main focus of ADB’s operations in India, including transport, energy, and water supply and sanitation. ADB will also participate in developing Smart Cities. Infrastructure projects will give priority to lagging states to support poverty reduction. In order to speed up the implementation of infrastructure projects, ADB has just introduced major reforms to streamline its procurement procedures, relying more on country systems and delegating more authority to country offices. He said, “The Resident Mission in New Delhi can play a much greater role to strengthen ADB’s operations in India.”

ADB will support the government’s vision to boost manufacturing through economic corridors. It will be a partner in the development of the East Coast Economic Corridor (ECEC) that will run from Kolkata in West Bengal to Tuticorin in Tamil Nadu. ADB is working with the Ministry of Industry and Commerce and state governments on the first phase of the ECEC—the Vizag Chennai Industrial Corridor—which is expected to play a key role in boosting trade with East and Southeast Asia. Mr. Nakao said, “ADB is not thinking in terms of one-off investment projects. Instead, it will first analyze economic conditions of the region, examine what types of industries have potential to grow, and consider infrastructure and regulatory requirements that will allow these industries to blossom.”

ADB’s President expressed his full support to help realize Prime Minister Modi’s vision on regional integration and connectivity. ADB is providing in 2014 loans amounting to $1.2 billion to projects under the framework of the South Asian Association for Regional Cooperation (SAARC). These include loans and technical assistance to support subregional roads, hydropower generation, cross border power lines, and trade facilitation.

In addition to lending to the government, ADB committed about $1.3 billion for non-sovereign operations in 2011-2013. ADB is supporting India’s first concentrated solar power plant in Rajasthan, power distribution systems in New Delhi, and providing credit guarantees of infrastructure project bonds. ADB has also made equity investments in off-grid solar power in rural areas, agribusiness, and renewable power. ADB has been supporting PPP projects through technical assistance and financing through Indian banks. “We will expand ADB’s PPP operation in India through our newly established PPP office at our headquarters,” said President Nakao.