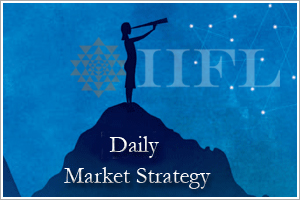 Back to the market, the situation appears better this morning. Indices could start off on a cheerful note buoyed by global cues.

The world is governed more by appearances than realities, so that it is fully as necessary to seem to know something as to know it. - Daniel Webster

The market saw all its gains vanishing on Tuesday as profit booking set in, especially in the banking counters. The government has proposed exempting interest earned on gold deposits from income tax, wealth tax or capital gains tax. It is also examining the option of allowing banks to use gold deposited under the monetisation scheme announced in the Budget as a part of their cash reserve and statutory liquidity. The draft gold monetisation scheme seeks to bring in small investors by lowering the minimum gold that can be deposited to 30g from 500g.

Back to the market, the situation appears better this morning. Indices could start off on a cheerful note buoyed by global cues. Reliance Communications could take over Sistema Shyam Teleservices (SSTL) in an all-stock deal. Expect action in these counters. Tata Steel has already addressed some concerns so disappointment may be less on the counter as it announces its numbers.  DLF, Aarti Drugs, Bajaj Finance, Archies, Bharat Forge and  Brigade are among the other counters which will see action based on their results.

The Dow was up 0.07% while S&P closed a tad lower. Nasdaq shed 0.17%. Japan's Nikkei 225 index was trading higher, Hong Kong's Hang Seng index was lower and China's Shanghai index is in the green.

The Cabinet Committee on Economic Affairs (CCEA), led by Prime Minister Narendra Modi, has already granted approval for stake sale worth about Rs 50,000 crore (at current prices) in about 20 companies, says a report.

The NSE had about 5.2 million active clients for all stock brokers of the exchange.

The valuation of holdings by domestic institutional investors (DIIs) in National Stock Exchange (NSE)-listed firms hit a six-year high of Rs 10.21 lakh crore at the end of March, on account of buoyant markets, says Prime Database. In percentage terms, DII holding in NSE-listed companies went up to 5.01 per cent at the end of March 31, compared with 4.58 per cent on an aggregate basis.

Reliance Industries Limited announced that it has priced its Regulation S offering of US$ 200 million 5% Senior Unsecured Callable Notes due 2035 (the “Notes”).These Notes, denominated in US dollars, have been issued primarily to Taiwanese life insurance companies and are proposed to be listed on Taipei Exchange (formerly known as GreTai Securities Market). Such notes are commonly known as Formosa Bonds.

GoAir Promoters are exploring options for IPO and looking at $150-200 mn size, according to reports.Report said that the airline appointed 2 bankers to explore IPO Options. The promoters are looking at total valuation of $650-700 mn, says report. The airline is likely to consider IPO by Q4 Of Current Calendar Year.

Bharti Airtel rallied to a high at Rs. 405 on media reports that the firm is in advanced talk to buy out Augere Wireless Broadband India for about Rs. 150 crore to consolidate its 4G high-speed broadband footprint ahead of Reliance Jio Infocomm's launch. The stock however, ended with a loss of 0.6 percent at Rs. 395.

Among other stocks - Bharti Infratel scaled to hit 52-week high at Rs. 440 after the company informed the BSE that it has been included in the list of stocks in MSCI Global Standard Index. The stock ended with a surge of 5.1 percent at Rs. 439.

NIIT Technologies added 1.6 percent at Rs. 387 after the company has signed a strategic agreement to acquire majority stake in Incessant Technologies.

Kellton Tech Solutions zoomed 15.4% at Rs. 76.50 after the company informed the BSE that it is in the final stage of acquiring a US-based IT Solutions Company with revenue of about $ 40 million.

AXISCADES Engineering Technologies tumbled to hit 5% lower circuit on the BSE on reporting 27.3 percent decline in Q4 net profit on year-on-year basis. However, the stock recovered most of its losses and ended with a loss of 1.5 percent at Rs. 245.

Suzlon Energy rallied to a high at Rs. 26.90 on receiving new order from Mytrah Energy to supply 98MW project in Telangana. The stock however ended unchanged at Rs. 26.15.

Just Dial soared 5.7% at Rs. 1,139 on reports that the company has expanded the scope of B2C transaction based services by adding product e-commerce marketplace.

Lloyd Electric & Engineering is looking to scale up advertising and marketing spends in order to increase market share in the room AC segment. The company’s expenditure on brand building will go up by over 50% to Rs550m this fiscal. (BL)

Competition Commission of India has approved the acquisition of Alstom’s India assets by General Electric as part of global deal. (BL)

Reliance Industries has raised US$200mn through a fresh issuance in Taiwan. The company raised 20-year debt paper on May 18. (ET)

Puravankara Projects announced a major restructuring in the company to achieve higher growth in sales and delivery of projects over the next five years. (ET)

Tata Steel said it has no immediate plans to sell-off its Long Products Europe business to the Switzerland-based Klesch Group. (BS)

Glenmark Pharmaceuticals has raised Rs9.45bn by issuing over 10mn shares to Aranda Investments, an indirect subsidiary of Temasek Holdings. (BL)

Hyundai Motor Group expressed its desire to expand its business into sectors like construction and railways in India, where it is currently the largest exporter of cars. (ET)

Bharti Airtel is all set to buy out Augere Wireless, 4G spectrum holder company in Madhya Pradesh circle, for about Rs1.5bn. (ET)

Syndicate Bank said it will raise up to Rs55.5bn from a mix of equity and bond to meet its capital requirements. (BL)

Seeking to mobilize gold held by households and institutions, the government released a draft scheme under which a person or entity can earn interest by depositing the metal with banks. (BS)

India's economic growth is projected to surpass that of China's, with the GDP expected to zoom by 7.7% in 2016, according to a UN report which said India will help accelerate economic growth in South Asia. (ET)

In a bid to attract more foreign investment, the government is looking at doing away with the mandatory approval of the Reserve Bank of India which currently is needed after an investment proposal has been approved by the FIPB. (BS)

Retail inflation based on consumer price index for rural labourers eased to 5.49% in March from 6.19% in previous month. (ET)

Click below for the India Infoline Daily Market Strategy:
https://content.indiainfoline.com/Newsletter/200515.html

Techno Electric stock gains after the company gets order of Rs1,455-crore