The Eight Core Industries have a combined weight of 37.90% in the Index of Industrial Production (IIP).

The Reserve Bank of India (RBI) on Thursday said it will come out with its third bi-monthly monetary policy review on 5 August.  The central bank in a release said: "The Reserve Bank of India will announce the Third Bi-monthly Monetary Policy Review, 2014-15 on Tuesday, August 5, 2014." In its last policy review in June, the RBI had kept the repo rate—at which it lends to the banks—unchanged at 8%. In the June 3 policy review, RBI left key rates unchanged and unlocked about Rs 40,000 crore of funds by reducing the amount of deposits banks are required to park in government securities. This was the second time in a row that interest rates were left unchanged amid demands for moderation to spur growth. "The RBI is likely to stay on hold in August, and we push back our rate hike forecast to 4Q 2014. the latter is a close call and predicated on an expected rise in food costs due to poor rains," the HSBC research note said. HSBC further said: "Weak food inflation in June encourages the central bank to give more time for the government's supply-side measures to work. At the same time, headline inflation is too close to the year-end target to make the RBI comfortable about doing away with rate hikes altogether."...Read More

There is broad convergence of views and interests between India and US: PM 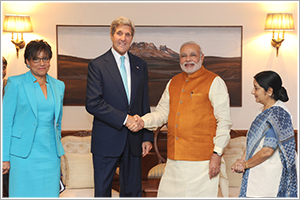 U.S. Secretary of State John Kerry and U.S. Secretary of Commerce Penny Pritzker called on Prime Minister Narendra Modi. In an hour-long meeting, the two visiting Secretaries briefed Prime Minister on the India-U.S. Strategic Dialogue; conveyed that President Obama attached great priority to relations with India, both for bilateral cooperation and global partnership, and looks forward to a productive and fruitful Summit in September in Washington to set an ambitious new agenda to chart a new course in the relationship. Prime Minister said that there was broad convergence of views and interests between the two countries. He outlined his vision for India and for the partnership between the world`s two largest democracies in addressing global challenges, promoting peace and stability in the world and supporting India`s own economic transformation. Prime Minister highlighted the opportunities for partnership in trade, investment, clean energy, innovation, education, skill development, agro-processing, youth empowerment, among others. Prime Minister emphasized the need for developed countries to understand the challenges of poverty in developing countries and their governments` responsibilities in addressing them, when discussions take place in international forums. 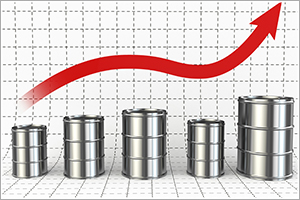 Petrol price was reduced by Rs 1.09 per litre, while diesel rates were hiked by 56 paise a litre.

Report stated that Petrol in Delhi will cost Rs 72.51 per litre as against Rs 73.60 a litre currently.

Earlier Petrol price was reduced by 70 paise on April 16 in line with declining trend in the international market.

India July HSBC Manufacturing PMI at 53 vs 51.5 in June

The HSBC Manufacturing Purchasing Managers' Index (PMI), compiled by Markit, rose to 53.0 in July from 51.5 in June, its highest since February 2013. A reading above 50 separates growth from contraction. While the HSBC PMI has signalled an expanding manufacturing sector for nine months, a surge in new orders in July helped drive the solid improvement in business conditions. The new orders sub-index soared to 55.9, its highest since February last year. That was the biggest monthly jump in the measure in eight months. "A flood of new orders from both domestic and external sources has led to a surge in activity," said Frederic Neumann, co-head of Asian economic research at HSBC...Read More 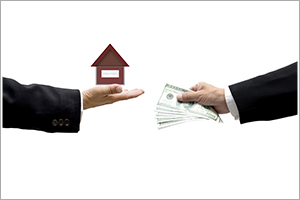 With the Government’s latest measures on tax exemptions, incentives for the real estate sector and the Reserve Bank of India’s announcement on the issue of long term bonds by banks for infrastructure financing and affordable housing, it is inevitable that you will be in an urge to buy a home as you can now look at saving more taxes on your home loans while paying lower equated monthly installments or EMIs. Experts are of the view that demand for housing will be made affordable to some extent and this move will also pump up the demand for home loans. The move is expected to reduce EMIs of a home loan borrower by nearly 8-10%. That apart, the recent tax incentives of raising deduction on interest on home loans from Rs 1.50 lakh to Rs 2 lakh will further help the individual to boost his annual savings to nearly Rs 1 lakh. While these are some very good moves for the masses, it is also important to insure your home loan...Read More

The Right Reasons Behind Switching Your Home Loan

A Small Loan on an Expensive Home

Look into your finances to revaluate the amount of loan taken for the property. If you have taken a small loan for an expensive home, then it is best to check if your other borrowings like credit cards, personal loans, educational loans, etc. are running at a higher rate than your existing home loan. In this case, you can approach your current lending partner for a top-up loan, and if the top-up loan comes with additional costs higher than the current market rate for home loans, you have a great reason to switch. You can switch your lending partner and take as much as 100% top up at the same home loan rate. This will enable you to close all of your other high-rate bad loans at a lower rate of interest...Read More

Stocks closed down today with the S&P 500 and the Dow Jones Industrials both down 1.8% despite yesterday’s stronger-than-expected GDP report, numerous earnings reports which beat Street expectations and no hints of early interest rate moves from the Fed. Bearish or negative news stories weren’t much different from the day or week before – unrest in the Middle East, sanctions on Russia in response to fighting in the Ukraine and an on-going argument between Argentina and a hedge fund over debt. There was no single event to send the market down for the worst loss in years. Fear, greed, anxiety and the madness of crowds really do drive markets. While it is often possible to cite shifts in the economy, corporate earnings or political events for market moves that extend over months or years; short term day-to-day shifts are driven as much or more by emotion than by reason and news. Robert Shiller, the author of Irrational Exuberance, describes surveys of investors down in the days following the 1987 market crash. Clearly today’s dip is nothing like the 1987 event when the S&P 500 dropped over 20% in a day, but then investors couldn’t point to a news story or major event that sent the market plunging. The most common news stories cited by investors were about falling stock prices, not some external change in fundamentals or the economy...Read More

Big Week for Economic Numbers and the Fed 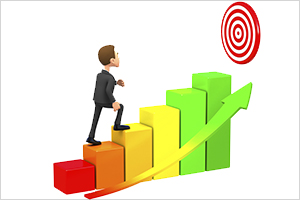 Genpact Limited, a global leader in designing, transforming and running business processes and operations, today announced the findings of a global research study that reveals how senior leaders across industries are prioritizing strategic operational initiatives to materially address the critical challenges that their companies face. This expansive research, utilizing an innovative social media-based method, covered 920 senior executives across finance, procurement, risk, marketing and operations from the largest enterprises in mature economies in North America, Europe and Asia Pacific. The first report in the series is focused on the finance function. The remaining reports will be published in the coming months and provide insights on other functional roles as well core operations in banking, insurance, life sciences and healthcare.

Long-term bonds have posted solid gains thus far in 2014, with rates holding low longer than most expected. The composition of the municipal bond market is heavily weighted with short duration bonds. The looming sentiment of rising rates and inflation has investors focused on reinvestment risk; however, a supply imbalance systemic of voters’ hindrance for governments to take on additional debt has municipals as a whole outperforming their peers. This is demonstrated in the S&P Municipal Bond 20-Year High Grade Index which has a YTD return of 14.29% due to low rates & short supply. In a year of record corporate bond issuance from low cost/easily available financing in an environment where investors are looking anywhere for high-yield returns, corporates are under performing. The S&P U.S. Issued High Yield Corporate Bond Index has a YTD return of 5.05% compared to the S&P Municipal Bond High Yield Index which is 9.23%. The raw yield statistics can be misleading when considering tax implications, where the S&P Municipal Bond High Yield Index has a tax equivalent yield of 9.86%, far superior to its corporate bond counterpart of 5.26%. The heavily short-term weighted muni market is showcased in the broad market S&P Municipal Bond Index, which tracks over 75,000 bonds. The S&P Municipal Bond Index has a modified duration of 4.84 compared to 12.08 as seen in the S&P Municipal Bond 20-Year High Grade Index. Duration asserts not only the timeliness of cash flow repayment, but also the price volatility to interest rate changes. While the market prepares itself for rate inflation, those positioned for stagnant rates (long duration) have been benefiting...Read More