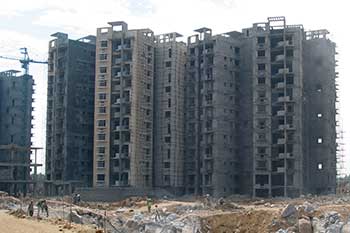 India Ratings and Research have maintained a negative outlook on the overall real estate (RE) sector for FY21. The stimulus packages provided by the government for the sector does not provide much hope, given the limited financial flexibility of and reduced credit availability to companies.

The agency has maintained a Stable Outlook for players in Grade-I residential real estate, commercial office and retail property development and operations and a Negative Outlook for non-Grade-I players for FY21.

Sector Consolidation and Strong Performance Across Grade-I Players Continue: For the remaining FY20, Ind-Ra expects Grade-I residential players to continue generating strong sales due to the ongoing consolidation in the market with fringe players losing ground in favour of Grade-I with better brand and execution ability. As per India Ratings and Research’s analysis, the market shares of the top 10 listed players gradually doubled to 13% in FY20 from 7% and 6% in FY18 and FY17, respectively. India Ratings and Research expect this trend to continue for FY21 as well. Conversely, the woes of non-Grade-I players have increased amid liquidity issues on account of declining sales, negative free cash flows, stricter regulatory compliance under Real Estate (Regulation and Development) Act and slowdown in lending from banks and non-bank finance companies.

EBITDA Margins of Grade-I Players Improve While non-Grade I Players Struggle: Grade I players continued to report healthy and stable margins of 27% in 1HFY20 (1HFY19: 27% and FY19: 26%), supported by a pick-up in sales. A rise in interest cost expense outpaced EBITDA growth due to an increase in debt and resulted in a moderation of interest coverage for Grade I companies to 2.47x in 1HFY20 (1HFY19: 2.95x).

Weak Cash Flow Generation and Leverage: The overall cash flow from operations (reported CFO+interest received-interest paid) of RE companies has been negative since FY13 and is likely to remain so. Grade I players continued to report better cash flows than non-Grade I players and positive CFO until FY19, albeit lower than FY18. India Ratings and Research expect Grade I players to continue reporting neutral-to-positive CFO in FY20-FY21, as their strong sales may be offset by the various payment schemes offered by them and higher cash outflow for investments in land, through either outright purchase or joint development.

Non-Grade I players have historically reported negative CFO since FY13 and may continue to do so during FY20-FY21, given weak sales and continued liquidity issues.

Improved Housing Affordability: India Ratings and Research believes housing affordability in FY20 to be better than FY12. Growth in residential prices was muted in FY18-1HFY19, resulting in time value correction in prices and consequently improved affordability. FY12-FY13 witnessed strong sales with investors having a dominant share in the overall market. Ind-Ra uses its affordability index (increase in housing price/increase in salary) to monitor the current affordability compared to the base year of FY12. Several residential players are expanding their portfolio in the affordable segment, given favourable policy support such as Credit Linked Subsidy Scheme, lower goods and services tax and exemption under income tax, as well as healthy demand for affordable houses. Companies with completed inventory will be in a better place in terms of offload risk than those with under construction projects, as the demand is driven by end-consumers who are averse to risks.

Stable Commercial Office and Retail Segment: India Ratings and Research expects demand for commercial office spaces to remain strong in FY21, driven primarily by demand from the e-commerce players, co-work office aggregators, data centre and IT- information technology-enabled services. Overall, absorption has continued to outpace supply since FY16, resulting in a decline in the quarter to absorption/lease inventory to 11 quarters in 1HFY20 (FY16: 14 quarters, based on unoccupied ready inventory) across the top six markets. Ind-Ra believes commercial office will continue to enjoy financial flexibility on account of investor inclination and its refinancing ability, given strong rental yields and stable cash flows.