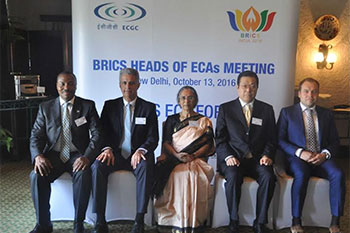 Members of the BRICS ECAs Forum are also the members of the International Union of Export Credit and Investment Insurers, London (U.K.) which is also known as Berne Union. BRICS ECAs are actively involved in facilitating cross-border trade by supporting export credits and foreign investments.

BRICS countries had a share of around 22 percentage of World Trade with a Total Exports of about USD 3.5 trillion in 2015. BRICS ECAs supported more than USD 473 billion of exports from the Member countries. Members exchanged notes about various credit insurance products, business sectors and major destinations covered by the group. Members also discussed business trends and the rising defaults and claims in the light of heightened political and economic risk.

The highlight of the meeting was an interactive session with Mr Xian Zhu, Vice President and COO, New Development Bank (NDB). BRICS ECAs initiated discussion on working in close co-operation with NDB to promote intra-BRICS trade and to support projects by BRICS exporters. ECGC updated members about the upcoming Technical Workshop which is being organized under India’s BRICS Chairmanship.

The Terms of Reference for co-operation finalized in the last BRICS heads of ECAs meeting held at Russia were signed by the CEOs of BRICS ECAs.

The next BRICS Heads of ECAs meeting will be hosted by SINOSURE, China under the chairmanship of China.