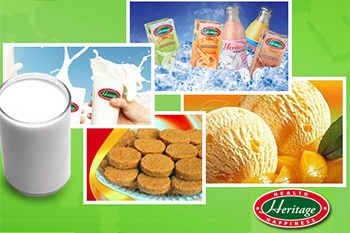 Heritage Foods Ltd., one of the leading private dairy players in India, on Thursday announced its financial results for the second quarter and half year ended on September 30, 2021.

“Heritage Foods has recorded strong recovery post Covid wave-2, by continuing to deliver strong top-line growth, expanding its value-added product portfolio and strengthened its Balance Sheet. During the quarter, the Company expanded its portfolio of Value Added Products (VAP) with the launch of Heritage Kesar Shrikhand and Heritage Amrakhand in Mumbai and Hyderabad markets. The Company also expanded its presence in paneer category with the launch of Heritage Malai Paneer Fresh in Mumbai.

During the quarter, the company’s revenue from VAP surged by 31.6% yoy to Rs1,696 million and its share of total revenue contribution increased by 4% to 25.7%, vis-a-vis Q2 of previous year. Heritage Foods is progressing well towards achieving ‘debt-free’ status by the end of FY22,” Brahmani Nara, Executive Director, said.