According to the International Data Corporation, the overall India PC shipments for Q12014 stood at 2.03 million units,representing ayear-on-yeardropof -25.2% over Q1 2013

The overall Commercial PC segment recorded atotal shipments of 1.02 million units,showinga marginal increase of 4.1% sequentially over Q4 2013. Kiran Kumar, Research Manager of Client Devices at IDC India comments, “The overall Commercial PC market showed first signs of improvement over the last 9-10 months as investment activities have improved in theBanking and Government verticals.Vendors are optimistic about the overall market sentiments and believe it will pick up gradually among other verticals too in the course of 2014.”

On the other  hand, the  overall Consumer PC shipments stood at 1.01 million units in Q1 2014, representing a drop of -4.3% sequentially over Q4 2013. “Consumer’ssentiments  plummeted further due to high inflation andsoaring prices owing to rupee fluctuations. Concerns over the economic conditions remained a key drag and Q1 was no different,”adds Kumar. 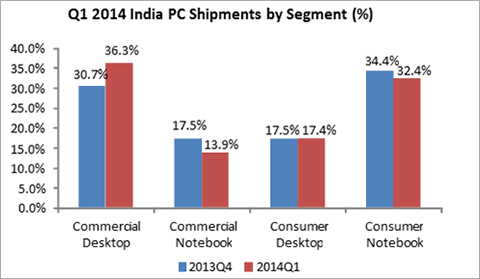 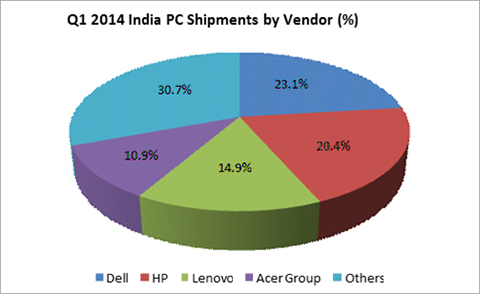 In terms of vendor share, Dell took early lead in 2014 and achieved a market share of 23.1%. “Dell is doing well in reenergizing their channel focus in both consumer and commercial business. Renewed approach in their go-to-market strategy, product refresh on their commercialportfolio,and deeper penetration in the upcountry markets have been their driving forces in Q1 2014,”says Manish Yadav, Market Analyst of Client Devices at IDC India.

HP, which dominated the India PC market in 2013 across all product categories, took the second place with a share of 20.4% in Q1 2014. They however continued to lead the Consumer PC market in Q1 2014 across both desktop and notebook categories.Pricing, widespread retail presence, and strong support from channel partners ensured their lead in the consumer market.

Lenovo,with 14.9% market share,took the third spot.“Lenovo is currently in midst of an amendment to their structure and policiesTheircommercial business unit continued to support the growth in Q1 2014 too.They are positioned strongly amongst private banking, IT/ITeS and telco accounts,” addsYadav.

IDC India anticipates the overall sentiments to get a boost amid hopes of a business-friendly and stable administration in the centre. Business optimism has climbed to its highest since the last 3-4 years and is expected to restore volume growth in the PC market over the next 12 months.

Yadav comments, “Though recovery is unlikely to happen immediately, the challenging economic conditions are expected to revive, bringing back consumer confidence.The impact of currency fluctuations is also expected to relieve through price control and inflation control measures. Vendors are expected to boost their sales during the festive period in the second half of the year. For the near term, Q2 may witness some growth on the back of education season but the growth is expected to be irregular.”

Praj Industries' stock price up by more than 7% today