The Indian indices have been scaling on expectations of a rate cut at the RBI upcoming annual monetary policy review next week. Globally, major central banks are expected to ease monetary policy further.

Monsoon is expected to be quite satisfactory in India excluding the southern tip—Kerala, Karnataka and Tamil Nadu, Food Minister KV Thomas said today.

Speaking to reporters on the sidelines of an event organised by the Bureau of Indian Standards in New Delhi, Mr Thomas said that monsoon rains in these southern states are likely to be delayed or could be less than the normal level.
India Meteorological Department is expected to announce its long range monsoon forecast for the year ahead later today.

The 44th WTCA started off with an inspiring slide show welcoming the audience to the next event at Bucharest, Romania.

A speech was delivered thanking the WTC Mumbai bringing in a great line of speakers and giving an overview on the events of Monday and Tuesday dwelling on important points discussed.

The session then started on the Geopolitical Risks in the Global Economy 2020, calling Dr. Nouriel Roubini, the Chairman of Roubini Global Economics, and Dr. Parthasarathi Shome, advisor to the Finance Minister of India along with other dignitaries. A Momento and a Bouquet were presented to Dr. Roubini and Dr. Shome by Kamal Morarka, WTC Mumbai Chairman to commemorate their presence at the event.

Dr. Roubini started off the event delivering an inspiring speech. He started off by saying it was a great honor and pleasure coming to Mumbai and observing the economic and policy outlook of the country. He went on to talk about the five positive trends for the global economy mentioning the financial crisis of 2008- 2009, the global economic growth accounted by emerging economies, about the weak balance sheets of advanced economies, the mobility of international capital in the form of labor and IT and the dependence of economic growth on the growth of productivity. He explained in detail about the potential risks to the global economy speaking about sub- par recovery in developed economies and talking about the economic conditions of Eurozone, the USA, UK, Japan, China and India.

India, he stressed has great economic potential having the demographic dividend provided by a young population. The youth population of India is higher than China which will be an advantage for India in the long run. To avail that advantage, Dr. Roubini explained that India must invest in its human capital by developing healthcare and Education sectors. India does not rely on external trade due to the demand and consumption of domestic products. He stated that last year’s GDP of 6% is not enough for a developing country like India and with the right reforms and GDP around 7 to 8%, it can grow very fast. Dr. Roubini then specified the negatives of the Indian economy such as political uncertainty, political coalitions slowing growth, beaurocratic constraints and bottlenecks in energy and infrastructure. Inflation in India is high; to stop the slowing growth, fiscal deficit must be reduced for which political will is needed. He further states that business and consumers confidence has reduced due to corruption and red tape in the Indian business environment. He praised India for economic liberalization for the past 20 years irrespective of the ruling party, but the policy reforms are slower than desirable. Read More

Bharti Airtel Limited, a leading global telecom services provider with operations in 20 countries across Asia and Africa, and Reliance Jio Infocomm Limited announced that they have signed an Indefeasible Right to Use (IRU) Agreement, under which Bharti will provide Reliance Jio data capacity on its i2i submarine cable.

i2i connects India to Singapore and is wholly owned by Bharti. The state of the art cable consists of eight fiber pairs using DWDM, capable of supporting multiple terabits of capacity per fiber pair. Its landing points are at Chennai in India and Tuas in Singapore. Reliance Jio will utilize a dedicated fiber pair on i2i. The high speed link will enable Reliance Jio to extend its network and service reach to customers across Asia Pacific region. It will connect Reliance Jio directly to the world’s major business hubs and ISPs, thereby, helping the operator to meet the bandwidth demand and provide ultra-fast data experience to its customers.

The deal marks Reliance Jio’s continued efforts to rapidly grow and expand both its international and domestic network and infrastructure by building an ecosystem with multiple carriers and service providers.

Bharti and Reliance Jio will continue to build on this strategic framework and consider other mutual areas of cooperation and development to leverage their respective assets towards offering their customers a much richer experience. The deal between Etihad Airways and Jet Airways has a ‘right of first refusal’ clause, which gives airline an opportunity to increase its stake in the Indian carrier if the Jet promoters planning to increase further stake sale in future, according to report.

Etihad Airways announced that the UAE national carrier has agreed to subscribe for 27,263,372 new shares in Jet Airways at a price of Rs754.74 per share. The value of this equity investment is US$379 million and will result in Etihad Airways holding 24 per cent of the enlarged share capital of Jet Airways.

Etihad Airways' wider overall commitment to Jet Airways includes the injection of US$220 million to create and strengthen a wide-ranging partnership between the two carriers.

As part of this Etihad Airways paid US$70 million to purchase Jet Airways’ three pairs of Heathrow slots through the sale and lease back agreement announced on 27 February 2013. Jet Airways continues to operate flights to London utilising these slots.

An amount of US$150 million will be invested by Etihad Airways by way of a majority equity investment in Jet Airways’ frequent flyer program "Jet Privilege", subject to appropriate regulatory and corporate approvals and final commercial agreements which are expected to be completed within the next six months.

Under the strategic partnership, which will be subject to full regulatory and shareholder approval, the airlines will gradually expand existing operations and introduce new routes between India and Abu Dhabi, providing an ever wider choice to the travelling public. They will combine their network of 140 destinations, with Jet Airways establishing a Gulf gateway in Abu Dhabi and expanding its reach through Etihad Airways’ growing global network.

Prior to the allotment of preference shares, Jet Airways’ promoter Naresh Goyal, who holds 80% in the airline through Isle of Man-registered Tail Winds, will sell about 10 per cent of his stake. This will make the airline comply with the 25 per cent minimum public shareholding requirement. 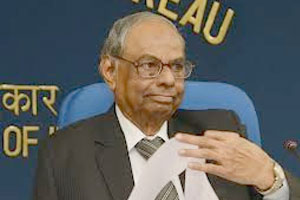 Dr. C. Rangarajan, Chairman, Economic Advisory Council to the Prime Minister released the document ‘Review of the Economy 2012-13’ at a Press Conference in New Delhi today. Following are the highlights of the document:

The Advance Estimates of CSO have pegged the growth of Agriculture at 1.8% in 2012-13. In expectation of normal or mostly normal monsoon, the farm sector growth is likely to improve and is projected to grow at 3.5% in 2013-14.

Global Situation: Global growth although projected to pick up in 2013 would continue to remain at modest levels. In such a scenario India’s projected growth rate of 6.4% is relatively high and respectable.

Investment rate is estimated to be 35.8% of GDP in 2012-13. There has been a sharp decline in the productivity of capital as the Incremental Capital Output Ratio (ICOR) has shot up from its historical level of around 4.0 to much higher levels. The computed ICOR for 2011-12 and 2012-13 ranges from 5.4 to 11.4, depending on how the ratio is calculated. It appears that investment capital accumulated in projects is not yielding commensurate output. Read More

All the news on Infoline: