However, satellite images released by the IMD indicate a decent concentration of monsoon clouds.

This year's monsoon rains appear set to start on the southern coast of India in the next 24 hours, according to the Indian Meteorological Department (IMD). Typically, the monsoon rains start on the southern coast around 1 June; thus, this year there has been a marginal delay. Accordingly, rainfall has been 40% below normal in the first week of June. However, satellite images released by the IMD indicate a decent concentration of monsoon clouds. Nevertheless, one must note that this is too early in the monsoon season to form an opinion either way.

For the Reserve Bank of India (RBI), this year's monsoon rainfall will be a crucial variable in calibrating monetary policy, as the rains will have implications for both inflation and growth (see India: CPI and the RBI – Concerns overdone?, 4 April 2014). The RBI had a marginally dovish stance in its June policy statement. But El Nińo-related risks cannot be discounted. If the monsoon rains fail in the coming months, fears of higher food inflation will come back (see Asia Strategy Notes: El Nińo: An emerging risk for food prices, 6 May 2014). However, the IMD is expecting monsoon rains to be ~95% of normal in 2014, according to its late-April projection for the season. It is likely to release an updated view in late June. In this context, what also appears healthy is that water reservoir levels are significantly higher (~150%) than their 10-year average levels, which gives a buffer in case of a weaker monsoon season, as per the latest report from the Ministry of Agriculture. If the IMD’s projections hold good, we expect retail inflation – the RBI’s key focus at the moment – to be in a low 7%-handle, on average, in FY 14-15. According to the RBI, inflation could fall to around the mid-7% handle by December, and around 8% by March-2015. With a likely softer inflation trajectory, a largely stable outlook for the INR and only a limited uptick in growth momentum, we think there would be greater room for a more balanced monetary policy stance. 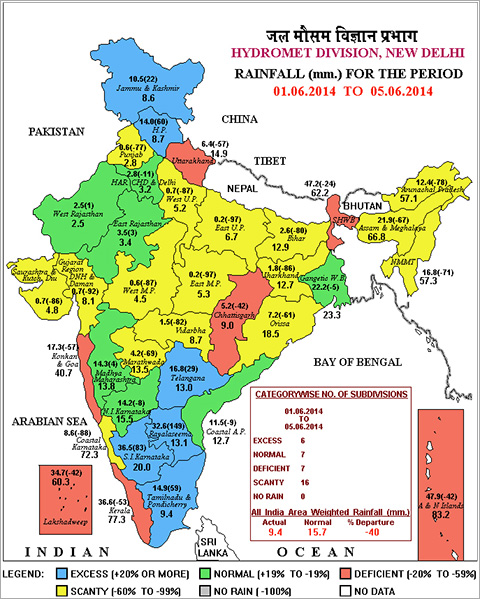 Note: 1) rainfall figures are based on operation data.

Percentage departures from normal rainfall are shown in brackets.

Figure 2: ... but monsoon onset expected soon in India, as per satellite images 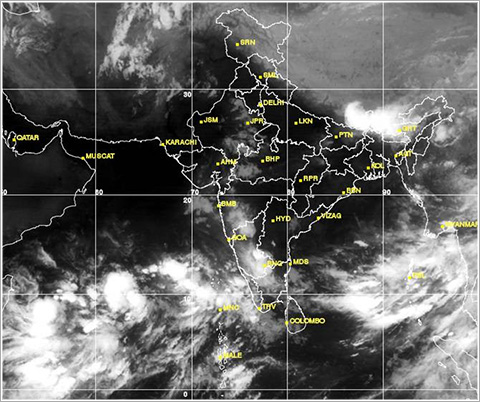 Note: Satellite images from Kalpana-1, as of 5 June 11pm IST

Investors' wealth has declined by Rs 13.3 lakh crore in the past 4 days