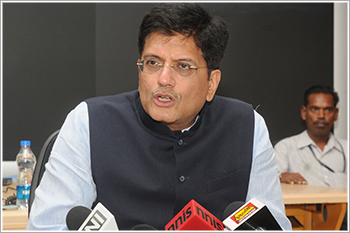 Piyush Goyal, Minister of State for Power, Coal, New and Renewable Energy released NTPC Book on bio diversity “The Good Earth " and planted a sapling along with students to commemorate Environment Day at a function held in Noida today.
Speaking on the occasion he said Indian economy shall grow by leaps and bound and so will NTPC fulfilling the aspirations of all Indians. The mission of the present government is to increase use of clean technologies and renewable for power generation making Clean India Energy Capital of the world. He also emphasized on the need to restore the forest cover depleted over a period of time through massive tree plantation. He urged NTPC to increase its tree plantation target and keep a proper record reflecting ownership of the activity. He suggested NTPC nurturing a green patch in all the states it has operations in.
Goyal said with successful schemes like Make in India and progress in Rural Electrification the demand of power shall increase many folds. He added that NTPC has successfully demonstrated its ability to deliver large projects and producing power in an efficient reliable and affordable manner. He said that the power sector in India is focusing on environment sustainability and NTPC has taken a lead by preserving flora and fauna in and around its power stations. The book released today captures the long term efforts of NTPC in the direction and shall be an inspiration for all corporate to care for environment.
He congratulated NTPC family on its 4670 MW largest power station Vindhyachal achieving 100.05% PLF generating 114 MUs in a day yesterday.
In his address, Shri Gurdeep Singh, CMD said that NTPC is deeply committed to environmental sustainability and has taken many initiatives for its betterment. Company is focused on mitigating the impact of its operations and pursues progressive environment systems and practices.