The International Monetary Fund says the UK economy will be the fastest-growing in the G7 this year.

The strengthening of the recovery from the Great Recession in the advanced economies is a welcome development, according to IMF staff. But the latest WEO also emphasizes that growth remains subpar and uneven across the globe.

“The recovery which was starting to take hold in October is becoming not only stronger, but also broader,” said IMF Chief Economist Olivier Blanchard. “Although we are far short of a full recovery, the normalization of monetary policy—both conventional and unconventional—is now on the agenda.” Blanchard cautioned, however, that while acute risks have decreased, risks have not disappeared.

In this setting, the global economy is still fragile despite improved prospects, and important risks—both old and new—remain. Risks identified previously include finishing the financial sector reform agenda, high debt levels in many countries, stubbornly high unemployment, and concerns about emerging markets.

New worries on the horizon include persistently low inflation in advanced economies, a weaker outlook for emerging markets than thought in the second half of last year, and recent geopolitical strains. Against this background, the WEO underscores that stronger policy efforts are needed to fully restore confidence and ensure a durable and sustained global recovery.

Overall, the outlook remains broadly unchanged from the October 2013 WEO.

A major impulse to global growth has come from the United States, where annual growth in 2014–15 is projected to be above trend at about 2¾ percent. More moderate fiscal consolidation helps; support also comes from accommodative monetary conditions, a recovering real estate sector, and higher household wealth.

In the euro area, growth has turned positive. Across the euro area, a strong reduction in the pace of fiscal tightening is expected to help lift growth. Outside the core euro area, contributions from net exports have helped the turnaround, as has the stabilization of domestic demand. However, growth in demand is expected to remain sluggish, given continued financial fragmentation, tight credit, and a high corporate debt burden. Growth performance will therefore continue to lag the core euro area.

In Japan economic activity is expected to get a boost from some underlying growth drivers, notably private investment and exports. Nevertheless, economic activity overall is projected to slow moderately in response to a tightening fiscal policy stance in 2014–15, starting with the rise in consumption tax.

Emerging market and developing economies continue to contribute more than two-thirds of global growth, and their growth is projected to increase moderately from 4.7 percent in 2013 to 4.9 percent in 2014 and 5.3 percent in 2015. The weaker momentum compared with advanced economies reflects in part the adjustment to a less favorable external financial environment and, in some cases, continued weak investment and other domestic structural constraints. Going forward, stronger exports to advanced economies are expected to underpin moderate increase in growth.

The WEO notes that the balance of risks to global growth has improved, but that some hurdles along the way remain. These include the following:

The report reiterates the risk from persistently low inflation in advanced economies, especially in the euro area. Inflation is projected to remain below target for some time, as growth is not expected to be high enough for economic slack to decline rapidly. Longer-term inflation expectations are then more likely to drift down in response, leading to even lower-than-expected inflation, or possibly even deflation. The result would be premature increases in the cost of borrowing and higher real debt burden. The lingering danger is that the longer inflation remains weak, the more vulnerable the region is to damaging debt deflation in the event of adverse shocks to activity.

Tighter financial conditions and the resulting higher cost of capital could lead to a larger-than-projected slowdown in investment and durables consumption in emerging markets, and thereby weigh on growth. The potential for reversal in capital flows from emerging markets to advanced economies as risk averse investors seek relatively more attractive advanced economies’ assets remains another concern. And there is a risk of renewed bouts of market volatility with the expected normalization to a more neutral monetary policy stance in the United States. In either case, the result could likely lead to financial turmoil and difficult adjustments in some emerging markets, with a risk of contagion.

Recent developments in Ukraine have increased geopolitical risks. Greater spillovers to activity beyond neighboring trading partners could emerge if further turmoil leads to a renewed bout of increased risk aversion in global financial markets, or from disruptions to trade and finance from intensified sanctions and counter-sanctions.

For advanced economies, the report underscores that policymakers need to avoid a premature withdrawal of monetary accommodation, given continued fiscal consolidation, still-large output gaps, and very low inflation. In the euro area, more monetary easing, including via unconventional measures, is recommended to sustain activity and help achieve the European Central Bank’s price stability objective. And in Japan, policymakers need to deliver on the “third” arrow of Abenomics—structural reforms to lift potential growth.

For emerging market economies, the appropriate policy measures will differ. But allowing exchange rates to respond to changing fundamentals and facilitate external adjustment will often be a critical step for stability. Many economies also need a new round of structural reforms to increase potential growth. These include investment in public infrastructure, removal of barriers to entry in product and services markets, and, in China, rebalancing growth away from investment toward consumption.

Low-income economies will need to avoid a buildup of external and public debt. Many of these economies have succeeded in maintaining strong growth, partly as a result of improved macroeconomic policies, but their external environment has also been changing. 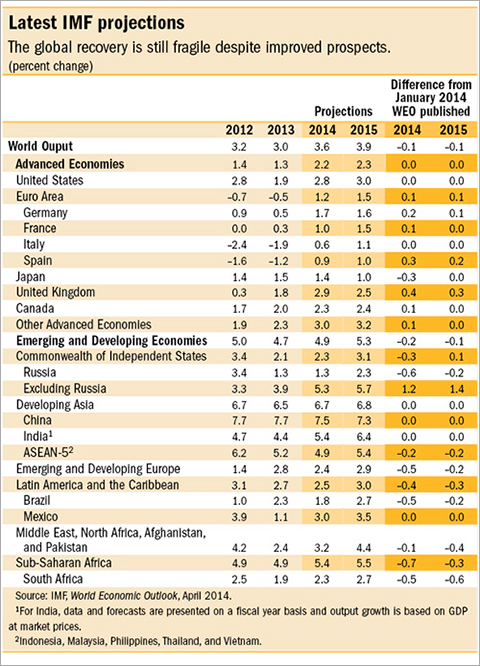 IMF lowers its prediction for India's GDP growth to 7.4% in FY23

Know all about Krishna Srinivasan: The new head of the IMF Asia-Pacific Department