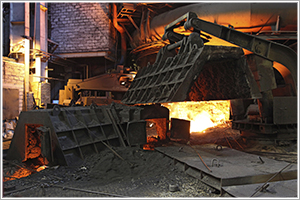 Fitch Ratings does not expect an increase in India's iron ore royalty rates to have a major impact on the profitability of steel producers in the country. Under the proposal approved by the Indian government, the royalty rate on iron ore will be increased to 15% from 10%. The government has not yet said when the increase will be implemented.

Fitch expects steel producers to be able to pass on their higher costs to consumers because of a likely improvement in steel demand in India. As a result, the higher royalty is unlikely to have a major impact on Indian steel producers' profit margins. Fitch expects steel demand growth to start to improve from the second half of the fiscal year ending 31 March 2015 (FY15), supported by a pick-up in consumption following rising consumer sentiments and an expected improvement in economic growth. The improving consumer sentiment is reflected in passenger vehicle sales data compiled by the Society of Indian Automobile Manufacturers - sales volumes during June and July 2014 rose from a year earlier, compared with a 6% fall in FY14.

Steel demand in India was weak during FY14 with consumption rising by just 0.6% to 73.9 million tonnes, according to data from Joint Plant Committee, a government body that collects data on the iron and steel industry. This was due to slow growth in the key steel consuming industries of automobiles, infrastructure, construction and engineering.