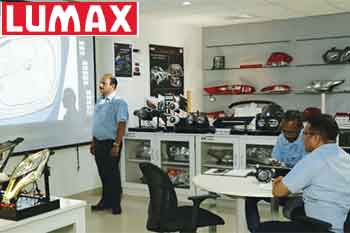 The company said, Q1FY22 operations were adversely affected; down by 38% from Q4FY21 due to the resurgence of COVID‐19.

Lumax Industries Limited, the leader in automotive Lighting and illumination on Friday announced its unaudited Financial Results for the quarter ended June 30, 2021. The company’s revenue stood at Rs314cr for Q1FY22 as against Rs504cr for Q4FY21. The revenue for Q1FY21 stood at Rs78cr.


At around 11.50 AM, Lumax Industries Ltd was trading at Rs1,471.35 per piece down by Rs35.1 or 2.33% from its previous closing of Rs1,506.45 per piece on the BSE.
Divisional Performance The Company has received new orders worth Rs250cr from OEM’s for their new upcoming models as well as localisation of lamps of existing models.

“Due to unforeseen resurgence of COVID‐19 in the beginning of FY22 resulting into regional lockdown which led to downfall in revenue by 38% in QIFY22 from Q4FY21. We are cautiously optimistic for the upcoming quarter with expectation of revival in demand. The monsoon has started off well across the nation and economic activities are opening up gradually. At Lumax, we have well defined strategy in place to drive the growth and achieve profitability,” Deepak Jain, Chairman & Managing Director, Lumax Industries Limited, said.

“We are making decisive investments in technology leading to the path of innovation which differentiates us from our peers and our expanding customer portfolio is example of that,” Jain added.