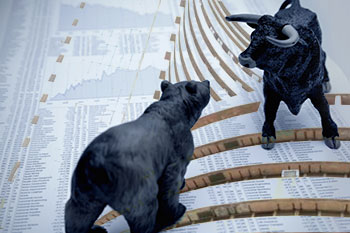 Indian markets traded higher, however, with a cautious tone in Friday's opening bell as investors observe new travel restrictions in some major states as the new Omicron virus variant finally makes its way to the country. On a broader term, the markets tracked the up-move charted by headline indices. SmallCap stocks outperformed. Banking and Capital goods stocks were major contributors to the upside. While IT and Oil & Gas stocks also logged substantial upside.

In broader markets on BSE, the SmallCap index climbed nearly 220 points while the MidCap index surged a little over 135 points.

As for sectoral indices on BSE, the Bankex index soared to near 190 points, while the Capital Goods index jumped around 480 points. IT and Oil & Gas index surged nearly 180 points and 120 points respectively.

Sensex bulls were - L&T advancing nearly 3% followed by Axis Bank and Infosys gaining around 1% each. Axis Bank and Kotak Bank stocks were also in the fast lane.

Sensex bears were - Nestle and Bharti Airtel tumbling over 1.4% each. Dr Reddy's Lab, Asian Paints and Sun Pharma dropped by 1% each. Reliance Industries also slipped over 0.9%.

On the global front, Asian stocks were mixed with Hong Kong's Hang Seng being the only bear after Ride-hailing giant Didi Global announced to delist from the New York exchange which escalated renewed worries over U.S.-China tensions and tech regulation. Didi also announced that it now seeks to get listed on Hong Kong shares, yielding to Beijing’s demands.

Other Asian cues were in the green, however, the performance is seen to be volatile.

Additionally, oil is headed for a sixth consecutive weekly drop after the OPEC and allies in their latest meeting decided to proceed with an output hike. Although, OPEC+ did also hint at quick adjustments in the output due to cloudy outlook amid Omicron variant spread.

Further, the US treasury yields fell in contraction with the significant gains of Wall Street overnight. The US Federal Reserve has signalled the prospects for quicker removal of policy support owing to higher inflation.

Traders also await the US jobs report which is expected to make ways for a faster reduction in Federal Reserve stimulus.

Overnight, on Wall Street, US markets finally see a bounce after 4 days of relentless corrections as Dow Jones closes higher by 600 points while Nasdaq bounces by 125 points. Russell 2000 index which mirrors the broader market jumps over 2.5% while the Brazilian 'Bovespa' jumps over 3.5% indicating how oversold stocks had gotten. US$ index closes nearly unchanged while bond yields close lower at 1.42%.