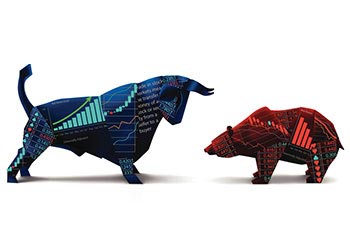 In domestic equities, investors bet cautiously against the favourable global cues as the steadily falling crude price and FOMC minutes indicating slowing of rate hikes.  At around 9:38 AM, Sensex was trading at 61,607.93 higher by 97.35 points or 0.16%. The index has touched an intraday high and low of 61,704.57 and 61,600.42 respectively. Nifty 50 traded at 18,296.10 up by 28.85 points or 0.16%. The index has clocked the day's high and low of 18,327 and 18,294.25 respectively. Tata Consumers stock skyrocketed nearly 3% to emerge as the top bull on Nifty.
Stocks like UPL, HDFC Life, climbed between 1.14-1.10%. Apollo Hospitals, BPCL surged marginally. Bears on Nifty were - Adani Enterprises plunging more than 1.3%. Tata Motors, Adani Ports, Bharti Airtel and Kotak Bank dived between 0.2-0.3%. In terms of sectoral indices, on NSE, except metals all other sectoral indices trading in the green but on a muted level. IT, metal and banking index gained marginally.
On the Asian front, markets opened in the green led by the Japanese "Nikkei' which traded higher by over 370 points in early trade as it reopened after a holiday yesterday. Most other Asian indices traded in the green with the South Korean 'Kospi' leading the gainers.

Overnight, on the Wall Street, US markets closed with the positive gains as Federal Reserve minutes indicate easing of rate hike trajectory with December hike of 50 basis points. Dow Jones closes higher by 100 while Nasdaq rises 110 as bond yields soften to 3.68%.