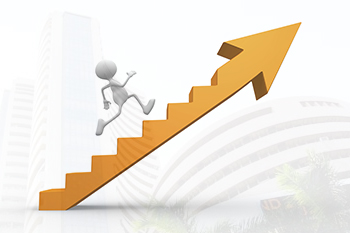 Indian markets traded in the green led by broad-based buying on Wednesday's opening bell. Except for metal, all other sectoral indices witnessed upside. The domestic equities shrugged off a weak trend in Asian cues amid major economic developments. However, the tone of the markets back at home is seen as volatile. PSU Bank has outperformed, while oil & gas and telecom stocks also witnessed substantial gains. India's volatility index has nosedived nearly 11%.

In terms of sectoral indices, on BSE, the Oil & Gas, Power and Telecom index soared by over 1% each. Utilities index climbed over 1.5%. While the Bankex index jumped nearly 230 points.

Bears on Sensex were - Bajaj Finserv, Tech Mahindra,  Maruti Suzuki, Asian Paints and Infosys down between 0.4-1%.

On the global front, Asian stocks were broadly in red with Japan's Nikkei 225 being the worst hit as it tumbled nearly 390 points or 1.3%. Japanese stocks have resumed trading after being closed for a holiday yesterday. Other markets were in red except for BSE Sensex.

Investors are keenly awaiting the latest US Federal Reserves minutes of the meeting along with other US data. Traders are cautiously betting as they weigh the risk that US central bank is likely to tighten monetary policy sooner than expected to curb inflationary pressure.

Overnight, on Wall Street, US markets closed mixed as Dow Jones stages a sharp comeback gaining nearly 200 points while Nasdaq sees profit booking to close lower by 75 points. Bond yields rise further to close at a 3-month high at 1.65%, while oil also sees a sharp uptick with Brent closing at US$ 80.