“Monster Employment Index has been maintaining resolute growth rates in the last three months in succession in 2014. This re-affirms a positive hiring outlook for the current year. Home appliance and IT are among the top growing sectors, with healthcare, bio technology and life sciences, pharmaceuticals recording the least growth. However, this momentum will be dependent on the outcome of general elections. A stable government will help build and strengthen business confidence; increased investments in core sectors will help drive the economy and shape the recruitment scenario in India.”, said Sanjay Modi, Managing Director, Monster.com (India/Middle- East/South East Asia). 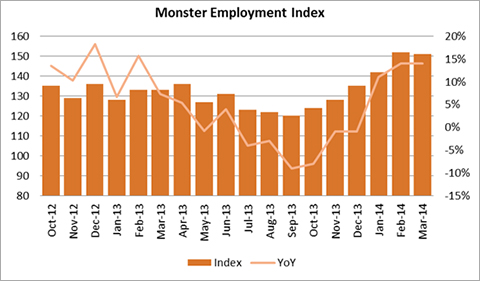 Monster Employment Index India results for the past 18 months are as follows:

Industry Year-over-year Trends: Online recruitment activity exceeded the year-ago level in 17 of the 27 industry sectors monitored by the Index

Occupation Year-over-year Trends:Online demand expanded in 10 out of the 13 occupation groups monitored by the Index.

Geographic year-over-year Trends: Online opportunities exceeded the year-ago level in 9 of the 13 cities monitored by the Index.