“With a 19% growth in the overall hiring activity which has been the highest since February 2013, Monster Employment Index reflects business optimism. Industry-wise on a YoY comparison, there has been a 59% growth in the Media & Entertainment industry making it the top growth sector.  There is a great deal of overall sanguinity around the new government to revive the economic momentum and constructing an investment friendly environment enabling creation of new jobs.” said Sanjay Modi, Managing Director, Monster.com (India/ Middle- East/Hong Kong/South East Asia). He further added,“In city-wise purview, after Bangalore, Mumbaihasshown a prominent 27% growth in job opportunities.” 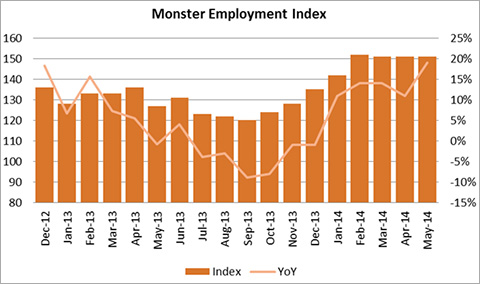 Monster Employment Index India results for the past 18 months are as follows:

Industry Year-over-year Trends: Online recruitment activity exceeded the year-ago level in 24 of the 27 industry sectors monitored by the Index

Media & Entertainment industry saw a significant 59% growth between May 2013 and 2014 to lead all sectors by the way of long-term growth. Month-on-month, online recruitment activity eased five% having charted double-digit growth the previous two months.

Travel and Tourism (up 49%) saw further improvement in the pace of long-term growth between April and May 2014.  The sector continues to rank among the top-five even though Media & Entertainment supplanted to occupy the top position.

The BPO/ITES (up 23%) sector which has been exhibiting fewer opportunities year-on-year since September 2013 (with an exception of January 2014) registered a significant positive growth this month. IT - Hardware, Software continued on a robust and positive growth path registering a 39% growth on the year.

Manufacturing and Commerce appears to be on a steady growth path. Available online opportunities surpassed the year-ago level in Production and Manufacturing (up five%) for the fifth month in succession. Logistic, Courier/ Freight/ Transportation (up 13%) sector registered the first positive annual growth since June 2013.

Senior Managementcontinued to chart dramatic annual growth. The group witnessed 61% growth in opportunities between May 2013 and 2014 to lead all occupation groups year-on-year.

There has been a notable increase in demand forMarketing & Communication professionals between May 2013 and 2014;up 44%. The group witnessed consistent progressive growth in opportunities since December 2013 following low levels from September to November 2013.

May 2014 saw a dramatic improvement in demand for Arts/Creative (up 16%) professionals, year-on-year. The group registered a double-digit growth in opportunities this month having registered steep annual declines from April 2013 through April 2014

Online demand for Customer Service (up 10%) personnel surpassed the year-ago level following negative annual growth in March and April 2014. Engineering /Production (up five%) saw the most restrained growth, year-on-year, among all occupation groups.

Geographic year-over-year Trends: Online opportunities exceeded the year-ago level in all 13 cities monitored by the Index.

Bangalore (up 37%) once again led all monitored cities by the way of long-term growth as the growth momentum improves 15%age points between April and May 2014. Online recruitment activity on the month, nevertheless, eased for the second time. There appears to be fewer opportunities available vis-ŕ-vis February 2014 (the three-month ago level).

The rate of year-on-year growth improved in all major job markets between April and May 2014. After Bangalore, Mumbai registered a 27% growth in opportunities between May 2013 and 2014. Delhi-NCR; Hyderabad; and Chennai recorded 20%, 19% and 17% growth respectively. Chennai exhibited a double-digit growth for the first time since April 2013.

Baroda (up 27%); Coimbatore (up two%); and Jaipur (up two%) saw online hiring surpass the year-ago level.