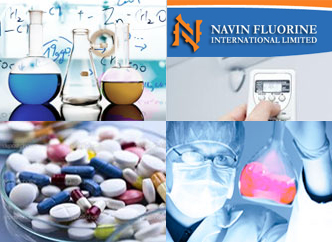 Navin Fluorine International Limited reported lower consolidated profit at Rs63.22cr in the second quarter ended September 30 of FY22, 7% yoy lower against Rs67.81cr in the same period last year. The raw material costs have been going up with the supply chain constraints visible across the global.

The company stock was under pressure during early trade on Wednesday and Navin Fluorine International Limited was trading at Rs3,550.95 per piece down by Rs309.3 or 8.01% from its previous closing of Rs3,860.25 per piece on the BSE.

The Board of Directors of your Company have, at their meeting held on October 19, 2021, declared an interim dividend of Rs5/- per equity share having nominal value of Rs2/- each for the financial year ending March 31, 2022.

The Board of Directors, on the recommendation of the Nomination and Remuneration Committee, has approved the appointment of Ms. Apurva Purohit as an Additional Director (Non-Executive) of the Company with effect from October 19, 2021. Ms. Purohit is also appointed as an Independent Director of the Company for a term of five consecutive years with effect from the said date, not liable to retire by rotation, subject to approval of the Shareholders of the Company, company said in a filing on Tuesday.