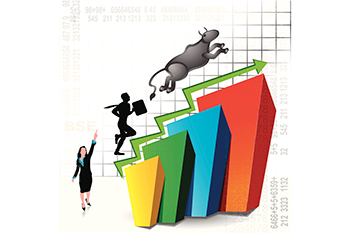 NALCO and Ratnamani zoomed over 1.9% and 1.8% respectively. Hindustan Zinc and Adani Enterprises climbed more than 1% each. JSW Steel and SAIL jumped 0.8% and 0.7%. Coal India traded flat but in green.

On the downside, NMDC, JSPL, Hindustan Copper and Tata Steel were marginally down.

Tata Steel in Q2 recorded an eight-fold rise in consolidated net profit to Rs11,918cr. The Tata Group company seeks to deleverage about Rs12,000cr this fiscal depending on cash flows.

In its Monthly Oil Market Report - November 2021, OPEC said that the base metal price index rose by m-o-m by 4.7% in October, with most components showing monthly average increases supported by declining inventories. Aluminium rose for the ninth consecutive month, up by 3.5% to an average of $2,934.4/mt. also supported by the ongoing energy power rationing measures in China, which restrict output. However, prices receded towards the end of the month as coal prices receded, suggesting an easing of the ongoing energy crunch.

OPEC said base metals advanced supported by declining inventories, though, towards the end of the month, the expectation of some reductions of the ongoing energy restrictions in China, which would, in turn, lead to higher output weighed down on prices. Gold prices were relatively stable with little movement in expectations of interest rates during the month.