The ongoing tale of Mobile Vulnerabilities

The Android master key vulnerability, which affected almost all devices, could make any mobile malware legitimate.

The mobile threat landscape is quickly resembling todays PC threat landscape wherein vulnerabilities are discovered one after another. Each new bug is more damaging than the one before it. And a lot of these bugs could lead to data theft or device infection if exploited.

Vulnerabilities have been cropping up since June 2013. The Android master key vulnerability, which affected almost all devices, could make any mobile malware legitimate.

Vulnerabilities in device accessories like SIM cards and fake iPhone chargers also came to the fore. A platform bug that could also trap a device in an endless reboot loop and another that could leak user data soon followed. And who could forget the most recent bugthe Heartbleed vulnerabilitywhich could affect mobile devices as badly as it could computers. 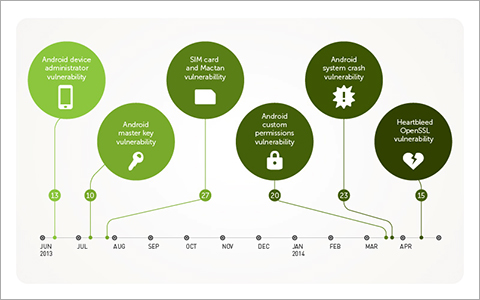 ANDROIDOS_OBAD, which was discovered in the early part of June last year, exploits a bug in Androids Device Administrator feature. When installed, OBAD could continuously pester affected users to activate the Device Administrator feature on their phones. Once done, OBAD allows attackers to gain root privileges on affected devices to get these to follow malicious commands.

Found in the early part of July last year, the master key vulnerability had to do with the way Android apps were signed by developers to prove they were legitimate. Exploitation allowed cybercriminals to push out malicious updates to legitimate apps, turning them bad.

The SIM card and fake iPhone charger (dubbed Mactan) bugs were discussed in Black Hat U.S. 2013. The SIM card bug had to do with using an old encryption system. To exploit it, attackers can send a specially crafted text message to cause an error in the target SIM card.

The affected SIM card responds with an error code that contains a 56-bit security key. Attackers could use this key to send messages to affected devices to trigger the download of malicious Java applets. These applets could perform malicious routines like send text messages and allow attackers to know where the users are.

The Mactan vulnerability, meanwhile, could allow mini-computers installed on fake chargers to initiate malicious USB commands. Apple has since issued apatch for this.

Enterprising cybercriminals could make sure that their malicious creations run custom permissions before any other app does. Once their malicious custom permissions run, they could make them run on legitimate apps, in a way Trojanizing them. That way, apps that contain personal data could be forced to share that information with the malicious app that was installed before it. Google, after being notified of this bug, has since issued a patch.

At around the same time, the reboot loop vulnerability was discovered. It not only affected Google Bouncerthe vendors response to malicious apps found in Google Playbut also all devices that ran Android 4.0 and above. If exploited, the bug could render devices unusable via brickingbeing forced to endlessly reboot.

The bug affects the WindowManager service, which handles how windows appear on a devices screen. If it crashes, the platform crashes, forcing affected phones to reboot.

Cybercriminals can set off a chain reaction by creating an app that opens a window specifically designed to crash WindowManager, specifically a window with a title too large for the service to handle. Once opened, the service and OS crash. If the malicious app runs every time a phone is booted up, the device will be bricked.

To stop the endless cycle of reboots, you can use a boot loader recovery fix or reset your phone. Note that these will wipe out all of the data stored on your device though.

We extensively reported on the Heartbleed vulnerability this year as well because it could affect not just computers but mobile devices as well. All devices, regardless of platform, may be affected if apps that access vulnerable HTTP servers are installed on them. Accessing servers is necessary for activities like making in-app purchases.

Note that devices that run other Android versions could be vulnerable, too. In fact, we found 273 apps in Google Play alone that came bundled with the vulnerable version of the OpenSSL library. If installed, these made any device vulnerable to the Heartbleed bug.

Live and Let Live or Upgrade?

"Mobile vulnerabilities are even more dangerous than mobile malware. Not only does exploitation expose users to even graver threats; those affected only has two optionslive with the vulnerabilities or buy a new device that runs the latest OS, especially if you use an Android device because the platform suffers from fragmentation," said Dhanya Thakkar, Managing Director, India & SEA, Trend Micro.

Fragmentation occurs when certain devices in an ecosystem are stuck with a particular OS version. The OS cant be updated because the device manufacturer has not yet optimized or released an update for a specific device. This renders affected devices vulnerable unless their manufacturers roll out updates, which could take a long time. It doesnt help that most manufacturers dont release updates at all.

You can live with some vulnerabilities if buying a new device is not an option. Just remember to adhere to mobile device best practices. Follow your companys regulations if you use company-sponsored mobile devices so you dont leak confidential corporate information.

Platform developers release updates or patch more so keeping an eye out for security news could be very helpful. Stay in the know to stay safe. Purchasing security apps to help keep your devices safe from threats is a very big help as well. They wont cost as much as a new device but can help keep your device bug and malware free.