The coming week promises to be action-packed as investors have to contend with a slew of political and economic news.

It's the final countdown...Will BJP bloom in states?

The nation awaits with bated breath the outcome of the assembly elections held over a month. The final tally could make it difficult for the ruling UPA government which is set to suffer a defeat if exit poll are any indication. The prospects of the BJP coming to power in most of the states will give a shot in the arm to the market. History shows that the party which wins the state elections need not usually win the general elections. But such is the Narendra Modi wave in many areas that the prospects of the BJP coming to power is exciting the market. The entry of Arvind Kejriwal's AAP has changed the dimension of the elections in Delhi. Though it has lost most of its sting, the party could play a spoiler for the Congress and BJP thereby changing the equation in the Centre. As things stand today, an alliance between either main parties with the AAP looks unlikely given the political idealogy stated by the AAP.

Rajasthan, MP and Chhattisgarh saw large turnouts. For a change, Delhi too saw record voters coming to cast their ballot. While BJP has fielded candidates in 66 constituencies, Congress and AAP are contesting from all 70 seats. Given the density and diversity of the Indian populace, voting preferences and patterns vary from state to state and even neighboring states exhibit stark differences. A case in point are the 2009 elections where several neighboring pairs effected different electoral choices – whether Himachal Pradesh & Haryana, Gujarat & Rajasthan, Jharkhand & Orissa and Karnataka & Andhra Pradesh. The much talked about anti-incumbency wave, as history has shown, may sometimes little nation-wide impact. In 1977, the huge anti-incumbency wave protesting the Congress-imposed Emergency did not affect South India. The party won 71% of the seats in the four southern states compared to 15% in the rest of the country and drawing a blank in two most populous states – Uttar Pradesh and Bihar. 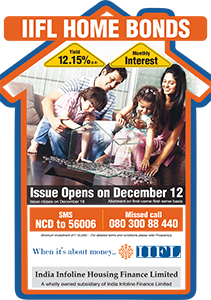 India Infoline Housing Finance Limited (IIHFL), the housing finance arm of India Infoline Limited, one of the largest diversified financial services companies in India, plans to open on December 12, 2013 a public issue of Secured, Redeemable, Non-Convertible Debentures (NCDs) of face value of Rs 1,000 each. The NCD issue is aggregating upto Rs 2,500 million with an option to retain over-subscription up to Rs 2500 million for issuance of additional NCDs aggregating to a total of up to Rs 5,000 million ("Issue"). These NCDs have a monthly option and will be issued for a period of 5 years. The yield on the NCD works out to 12.15% p.a. These bonds are secured against home and mortgage receivables. Our recent NCD issue of India Infoline Finance Limited, parent company of IIHFL, raised Rs 1,050 crores, including the green shoe option. This was the largest public issue of bonds, by any company in India, in the last 4 years (as per Prime Database)...Read More 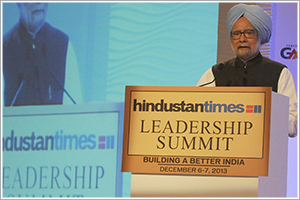 Following is the text of the Prime Minister, Dr. Manmohan Singh’s address at the Hindustan Times Summit, 2013, in New Delhi:

"I am glad to be amidst you today, but we meet in rather sad circumstances, the demise of President Nelson Mandela. He represented the conscience of the world. He also remained a beacon of hope for those struggling against oppression and injustice long after he had led his own people to victory over such ills. In a world marked by division, his was an example of working for reconciliation and harmony and we are not likely to see another of his kind for a long time to come. India regards him as a true Gandhian in spirit and ideal and joins the rest of the world in expressing a deep sense of gratitude to him for his work and teachings. We pray for peace for his soul. Coming back to today’s business, let me begin by complementing Shobanaji for her enterprise and commitment in organizing this annual gathering every year over the past decade. When I looked at the theme of each of your last ten summits, I noticed that you have consistently focused on India’s future – both on the opportunities and the challenges that lie ahead. The media are, by vocation, duty-bound to focus on the present, the here and the now. But I am glad that, through initiatives such as this Summit, they take time once in a while to think about the future too. In keeping with that spirit, let me also use this opportunity to step back and reflect on The Big Picture as I see it...Read More

Natural gas has become increasingly important as a source of energy: PM 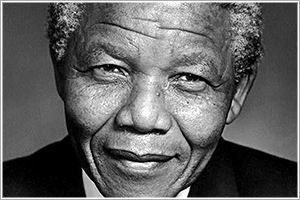 Nelson Mandela, the revered South African Anti-Apartheid icon expired on 5th December 2013, at the age of 95. He spent 27 years in prison, led his country to democracy and became its first black president. South African President Jacob Zuma quoted that the nation has lost its greatest son and its people have lost a father. US President Barrack Obama expressed his heartfelt condolences at this outset. Though Mandela was in power as the South African President for only five years, he was a figure of enormous moral influence the world over – a symbol of revolution, resistance and triumph over racial segregation. He inspired a generation of activists, left celebrities and world leaders star-struck, won the Nobel Peace Prize and raised millions for humanitarian causes. South Africa is still facing challenges of class inequality, AIDS and political corruption. Mandela quoted in his book 'Long Walk to Freedom' that no one is born hating another person because of the color of his skin, or his background, or his religion and that love comes more naturally to the human heart than its opposite...Read More

India’s economic confidence revived substantially due to healthy farm output, a sharp boost in exports and narrowing of current account deficit, according to a report by global research firm Ipsos. According to the "Ipsos Economic Pulse of the World" study, India's economic confidence jumped sharply by 11 points to 51 percent in the month of November compared to the month of October 2013. India now stands as 7thSweden, Canada, China, and Australia. Three in ten (32%) Indians believe that the local economy which impacts their personal finance is good, a health increase of 5 points. Indians are very hopeful about stability and growth in future with general election in the first half of 2014; four in ten (42%) people expects that the economy in their local area will be stronger in next six months, a slender rise of 1 point. "Indian economy has bottomed out after a two-year slump and it is likely to see a positive growth trend from here on with positive indicators like narrowing CAD, revival of exports, growth of manufacturing sector and increasing investor confidence," said Mick Gordon, CEO, Ipsos in India. "Good Monsoon resulted in bumper crop output, which in turn generated rural demand for goods such as tractors, motorcycles and consumer goods leading to growth of manufacturing sector," added Gordon. The online Ipsos Economic Pulse of the World survey was conducted in October 2013 among 18,083 people in 24 countries...Read More

Key Indices extended its winning streak for the second consecutive week after the current account deficit (CAD) narrowed sharply to US$5.2bn (1.2% of GDP) in Q2 of 2013-14 from US$21bn (5% of GDP in Q2 of 2012-13). Moreover, India’s manufacturing PMI read above 50 for the first time since July its highest in seven months. The HSBC Manufacturing PMI climbed from 49.6 in October to 51.3 in November. Also the Indian rupee rose to a five-week high against the US dollar. The rupee rose to as high as 61.52 against the dollar, its strongest level since October 31. However the Indian unit saw some weakness on Friday. The coming week promises to be action-packed as investors have to contend with a slew of political and economic news. Next week's opening will depend on the outcome of the state assembly elections given that the market’s rise in recent times has been attributed to expectations of the main opposition BJP likely to come back to power. The winter session of Parliament would be closely watched. The assembly election results will also decide whether the ruling UPA government can go ahead and take some bold decisions. Besides politics, investors and traders would also keep in mind vital economic data. The Nov CPI and Oct IIP data are scheduled to be released on Dec 12 which would also influence the sentiment...Read More

Click below for the India Infoline Weekly Newsletter:
https://content.indiainfoline.com/Newsletter/wkly802.html