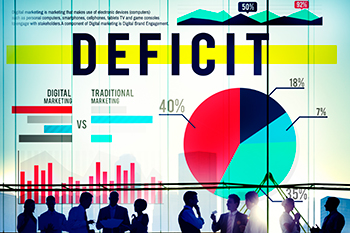 As the stock market rallied a day after Union Finance Minister Arun Jaitley presented the eventful Union Budget on Monday, doubts arose over the very Budget maths on the basis of which Jaitley pledged to keep the fiscal deficit bang on target at 3.5 per cent of GDP during the financial year 2016-17.

So what is the confusion all about?

Reading the fineprint of the Budget, some analysts pointed out that the Finance Minister was entirely betting on his Rs 56,500 crore disinvestment target to meet his revenue needs and achieve the deficit target. That at a time when the government has successively failed to meet its share sale target, and is falling far short of the Rs 69,500 crore target this financial year with total mopup of just Rs 25,000 crore.

Also, most of the public sector undertakings that the government has lined up for disinvestment, such as Coal India, ONGC, OIL, Nalco are all commodity-linked businesses, which may not look up too soon and the government might not be willing to sell them when valuations are cheap.

Again, given the uncertainty in the global markets and over the earnings growth expectations from the India Inc, one is not sure it and when the market conditions turn conducive for share sale.

Plus, the FM is also counting on a huge windfall from the sale of telecom spectrum, which again has a question mark looming over it as all major telecom firms have huge debt on their books and there is uncertainty that banks may not be too eager to lend to them liberally when the next spectrum auction happens, which will lead to lower bids. Will that cut into the revenue mopup is a question whose answer we will get only when the auctions are conducted. For the fiscal year 2017, the government expects to garner Rs 98,994 crore from the auction of spectrum and licenses.

This financial year, the government received a windfall of Rs 57,383 crore from the one-time spectrum charges, auction of 2G airwaves in the 1800 MHz, 900 MHz spectrum and 800 MHz bands, which was higher than its budget estimate of Rs 42,865.62 crore.

The government also seems to be banking on Rs 30,000 crore from the amnesty scheme and a 25 per cent rise in non-tax revenues. It is targeting revenues to grow 14 per cent, which would be achievable only if the GDP were to grow at an 11 per cent nominal rate. That way, the whole premise of 3.5 per cent fiscal deficit is premised on too many variables, giving good reasons to analysts to doubt it.