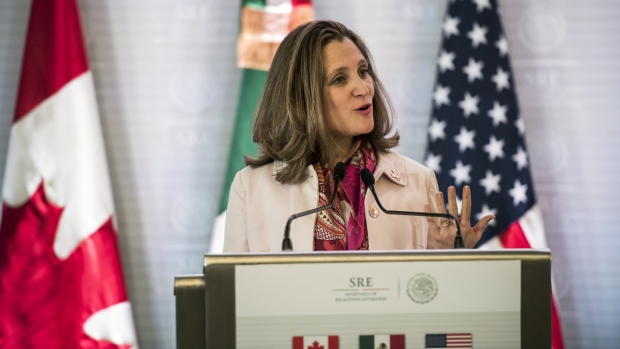 Nafta talks will resume on Wednesday in Washington with a focus on dairy as the US pressures Canada to strike a deal by Friday, a US official familiar with the negotiations said.

Canada’s Foreign Minister Chrystia Freeland is expected to visit the Washington office of US Trade Representative Robert Lighthizer starting at about 9 AM on Wednesday after arriving in the US capital late Tuesday.

Dairy is scheduled to be the main focus of the talks Wednesday, the official said. US President Donald Trump has previously said that Canada must reduce its tariffs on dairy to reach a deal.

At the same time, the US has prepared scenarios that would allow Canadian negotiators to claim a win on other issues, allowing Prime Minister Justin Trudeau and his team to save face, two US officials said.

The US made clear that the deadline for an agreement in principle is Friday, with no wiggle room, one official said. Despite US-Mexico progress, key issues remain for Canada, although markets are betting a deal will be reached that includes Ottawa.

Lighthizer didn’t speak to reporters Tuesday. Freeland struck a positive tone before and after, saying aspects of an accord struck without Canada at the table will help advance other issues. She said it will be an “important and constructive week” and that Canada was encouraged by the progress made without them.

“What has really paved the way for what Canada believes will be a good week is the fact that Mexico has made significant concessions on labor,” she said. "These concessions really are going to be valuable to workers in Canada and the United States."

The US side noted during the meeting that they’ve already compromised on the issue of the sunset clause, which was a sticking point for Canada, and that they hope that helps pave the way to a quick deal, one of the US officials said.

The US and Mexico announced a deal Monday after weeks of talks with just the two nations -- excluding Nafta’s third partner, Trump is now using that agreement to pressure Canada to come on board, though several key issues remain. Trump is prepared to move forward with Mexico alone, on the belief that Canada has more to lose from such an arrangement, the officials said.

There are also warnings that US trade law will prevent, or impede, Trump from ramming ahead on a quick timeline with only a two-country deal, and key figures in Congress are calling for Canada to be included. Trump has threatened to apply auto tariffs to Canadian exports if a deal isn’t reached.

The nations are pushing to sign a deal before Mexico’s president-elect takes office December 1. Due to timelines set out in US trade law, the US would need to notify Congress of a deal by Friday, Lighthizer said this week. However, he said a notification could be sent that left open the possibility of Canada reaching a deal sometime after Friday.