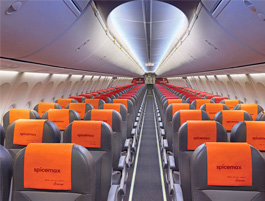 SpiceJet: A Take-off with a ‘Turnaround’ promise

SpiceJet’s restrained media strategy is as commendable as its achievement of a near-90 per cent load factor and 42 per cent cost reduction. The consciously worded management commentary - cheerful and cautious in the same breath – lends credibility to its future plans riding on the hope of capital infusion from international bigwigs.

Gurgaon-based SpiceJet has come a long way, from the 2014 June quarter loss of Rs 124.1 crore to a profit of Rs. 71.8 crore for the June quarter of this year, a good jump from its modest March 2015 quarter profit of Rs. 22.1 crore that ended a mega loss spree of seven prior months. Lending the Midas touch is undoubtedly the original promoter Ajay Singh who swung into action when the airline was on the verge of closure towards the end of last year.

To its credit, the airline has achieved a load factor of 90 percent in the latest quarter and brought costs down by 42 per cent compared to the previous year. In a cost-heavy sector of numerous vendors, this is no mean feat, more so in a quarter known for sluggish travel. The cushion of fuel price drop and currency advantage can’t diminish its significance. So also the 34 per cent decline in sales.

SpiceJet’s restrained media strategy is as commendable as its achievement of a near-90 per cent load factor and 42 per cent cost reduction. The consciously worded management commentary is cheerful and cautious in the same breath. The profit, the management affirms, is suppressed largely owing to its wet-lease (leasing arrangement providing flight along with crew included to resolve short-term capacity constraints) operations; else it could have been much higher. But the financial stress is gone for good, the top brass confirms. This is like saying ‘we are aware that this take-off is far from a turnaround but more than worthy of a hefty capital infusion from external sources.’ This measured stance renders most of the fervently emphasized media counsel focused on the company’s flip side obvious if not superfluous. Now whatever the actual progress on the ‘intermittent talks’ with overseas heavyweights, the subtle management sketch of possibilities do make investors hopeful of a global tie-up in the offing, especially given the airline’s awesome network  depth with the lower-tier towns of India that may lure international players with Pan India aspirations.

It may be recalled that not long ago, the airline was fighting a losing battle on multiple fronts. Some of its reckless moves – like the acquisition of Bombardiers in the mad pursuit to tap uncharted regions and the lavish discount spree in the vain hope of boosting passenger load –ultimately brought it down to a near-hopeless situation that could have easily swung the Kingfisher way. Of course, had it stuck to its original low-cost value prop of solo-type carrier, no-frill service and point-to-point ops, it could have gone the Indigo way.

The June quarter results are hence a good leap forward, far from a turnaround they may be. This is not to negate the negatives that yet plague the company – the massive burden of accumulated losses and liabilities, disproportionately large fleet size, impending operating challenge of cut throat competition amidst a weakening rupee, an expectedly ensuing weaker travel season as also the obvious need for significant investment to stay afloat.

From a market perspective, SpiceJet yet looks a risky bet given its exclusive woes as also the sector’s supply-side warfare and demand-side uncertainties. Besides, the IPO of the most efficient player Indigo is expected to be a game changer of sorts. The SpiceJet scrip doesn’t look firm at current levels. Down to par or higher than par, the downside risk is a possibility one can’t overlook. Even retail investors with a healthy appetite for risk would do well to wait and watch for positive developments (news of capital infusion primarily) before betting big on the SpiceJet turnaround which, given the promoter’s conviction, is by no means a far-fetched proposition.