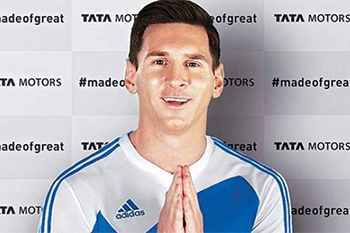 Both Tata Motors and Lionel Messi face a moment of truth in their illustrious careers and both need to measure up to their greatness, some of it which, at this moment at least, looks a little thrust upon them than innately carried.

Given the challenge in the passenger vehicle segment, Tata Motors had to do something conspicuous and it did, not on shop floors or showrooms but through a major departure from its age-old policy. President- Passenger division, ex-Maruti marketing luminary Mayank Pareek has announced legendary footballer Lionel Messi as the global brand ambassador for his portfolio. The whole idea is to bank on The Leo’s ‘Namaste’ to make gainful inroads into the global markets besides enticing the youth to sport Tata cars.

Looking beyond the predictable Tata and Messi bytes – about their trust in the credibility of his name and about his excitement to connect with an Indian brand and fascination for India et al – he seems the right choice for his remarkable commonality with India’s largest auto brand, however coincidental it may appear.

The Argentine captain, though very much in his prime, is not exactly at his peak, especially after having fell short in the World Cup when it mattered most, despite being the man of the tournament. The subsequent Barcelona win in the UEFA Champions League and the 28 La Liga goals offered little solace to the selfless sportsman and the inevitable comparison with Ronaldo is now marching towards a litmus test (and not merely because the Real Madrid star has openly staked claims to superiority) To add to Messi’s woes is the embarrassing encounter with Spanish tax authorities. Although the tax fraud charges have since been withdrawn, his father reportedly stands trial over the allegations relating to Messi’s global image rights. And now in a latest blow, a nagging knee Injury has kept him out of action at El Clasico. The wounded soldier, arguably the greatest among the best, needs to bounce back, yet again, in inimitable style.

Tata Motors, given its rich legacy and glittering engineering firsts like the New York stock exchange listing, faces a similar tight spot, challenged by several Ronaldos across fronts including the twin blows of cut throat competition and industry downturns, Nano debacle, mounting debt, penetrative cash bleeds and talent churn. Even its best bet for long, the subsidiary Jaguar Land Rover, faced rough weather in China following the stock market crash and the recovery ever since has been distinctly sluggish.

Far from the glitz, glamour and chutzpah that the George Bests, Ronaldinhos, Ronaldos and Maradonas of the sport have immortalized, the diminutive Messi brings a gritty, matter-of-fact conviction that might just help Tatas in their four-wheeled game of wooing passengers across the globe. They would want Messi to deliver the goods with characteristic flair, that former Argentine player and coach César Luis Menotti so eloquently describes, “He plays deep, he plays wide, he plays wherever he likes, because he plays like the gods!"

While his name will definitely have a noticeable impact on the global markets – to complement the JLR mileage – his pull in the cricket-crazy subcontinent is debatable if not suspect. Observers believe he’s likely to feature in the December 2015 ‘Kite’ launch, the compact Tata hatchback which is expected to be followed up by a compact sedan version in due course.

Whether Messi will leave the company mesmerized with several soaring kites, only time will tell but it’s high time Tata Motors contemplated on some niggling grassroots issues beyond the esoteric promise of brand ambassadors. There’s a strong need to break from the clutter even in this space.

Notwithstanding the 15 per cent growth in October 2015 passenger car sales as per the company release, the hypothetical trump cards have clearly failed to turn things around. The Zest has lost much of its zest to catch up with Swift Dzire and the Bolt seems to have come from the blue the wrong way. Tata’s legendary Achilles heels – below-par customer service and, of course, engines that unintentionally remind you of their HCV offerings – continue to be the talk of the town. Ask any prospective buyer and Tata is never on his wish list by choice. Pareek’s segmented marketing initiatives – building customer-centric sales teams to cater to the young professionals among buyers - spell abundant promise but are essentially long-term bets.  How long…only time will tell but we hope they don’t outlive the plan to launch new vehicles that extends to the year 2020. The entire buzz about alternate fuels, hybrids and electric vehicles is fine but it can’t condone the need for making car comfort as pivotal as car choice for buyers across segments. One also wonders why the company is not too keen to expand the key operations of IT services, machine tools, and factory automation which, given the Tata hallmark and benchmark of engineering excellence, should be contributing much more to its revenues.

Now that they have a key Maruti man with them, they could draw selective inspiration from the ‘Maruti way’ that should explain the how of Maruti’s Numero Uno status in the passenger car market. As for revisiting success stories scripted in-house, what better example than Tata Ace - a phenomenal case study for posterity…

…where a young divisional manager called Girish Wagh was handpicked to examine the below-2 tonne market. After a few months of introspection, a market survey dropped a hint or two when a farmer in Andhra Pradesh linked a four-wheeler with social status – “worthy enough to fetch a good bride”. In a knowledge session that followed, UK-based Warwick Manufacturing urged Tata Engineers to come up with a “quick & dirty solution” to move small loads.

After nine months on the job, the company finally settled on the choice – a four-wheeled goods carrier in a three-wheeled market. The project was attached aggressive cost targets and equally stringent quality goals – a noise-free, vibration-free car-like mini truck. Cost control was built into every stage of design – initial design & prototype, tooling and manufacturing and every cost component – engine, gearbox, cabin design and transmission. Another market survey found room for a four-wheeler sub-one tonne offering but only at a slight premium to three-wheeler alternatives. Tatas found their target market in the two bottom layers – comprising semi-urban and rural segments – at approximately 85 per cent of the total market. The need was defined as a blend between a pick-up & a three-wheeler – offering the lowest life-cycle cost including purchase price, operating cost and resale price. Basic design and vehicle shell were then decided in a jiffy.

A great debate ensued over a car-like bonnet vs. a truck-like front. Chairman Ratan Tata got involved, sketching the interior scheme & dashboard on the whiteboard in an impromptu session. Sourcing & Tooling experts got into the act, cost-effective e-sourcing orders for sheet metal components were secured, supplier buy-ins were quickly achieved and supplies began right from design stage.

Outcome: In-house Tooling cost less than Rs 50 crore. After a failed attempt to toy with outsourced engines, roving eyes fell on the Indica engine as a compromise choice. The Indica engine was sliced into half and a two-cylinder diesel engine took shape. New mounts attempted to fix vibration and noise (and succeeded to the extent they could)

The project cost is believed to have been around Rs. 200 crore spread over five years and the factory set up cost less than Rs 100 crore. The project champion supervised as many as 350 engineers on the vehicle design and over 90 per cent components were outsourced as against conventional norm of 60 per cent. What’s more, the search for engine business led to the birth of Tata Power Systems – the company’s engine business. In-house tooling was done on high Speed CNC machines and CAD for tools and panels. Tata Ace was a phenomenal exercise in cross-functional participation. No wonder, Ace triumphed to become the company’s smartest brand ambassador, true to its name that was conferred by none other than Ratan Tata during the trial phase.

We await a similar innovation in the passenger car segment that doesn’t prove Nano, both in foresight or hindsight. Messi would be more than happy to endorse it.