In 2011, BF Utilities under-performed the broader market and consistently traded below its 200-DMA. But in January 2012, the stock made a vertical ascend and in the process broke out above its 200-DMA.

There is no doubt that the underlying momentum is very strong. Traders are flocking to this counter to buy the stock on dips. Also, the buyers are coming in large numbers to buy at support levels. The counter has seen higher than average volumes in the last seven trading sessions as well.

BF Utilities had been trading in a range between Rs362 and Rs420 since March 2012. Since the stock has broken out above the upper trading band of the consolidation, the ongoing trading action should be termed as a bullish consolidation, which is most likely to break on the upside.

The daily chart of BF Utilities depicts a bullish ‘Inverted Head and Shoulder’ bottom formation with neckline placed at Rs408. Successive weekly close above the same is likely to ignite buying momentum in the stock.

We believe that the stock has formed a bottom at Rs365. A rebound from here is underway and further upside cannot be ruled out. Technical charts are appearing interesting from a long-term view. The longer term target for the stock is above Rs550. Every correction should be used as entry point. We recommend traders to buy the stock at current levels for a medium term target of Rs520. Maintain a stop loss of Rs365. 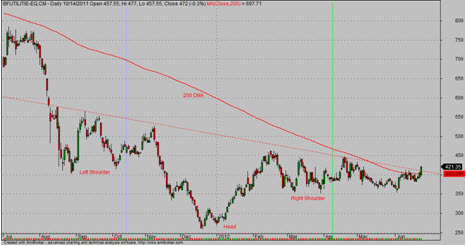 Cipla launches Leuprolide Acetate Injection Depot in US; Stock up 1%

Hackers, reportedly, have asked for Rs 200 crore in cryptocurrency from AIIMS