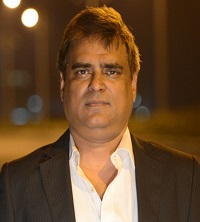 Mr. Bajrang Kumar Choudhary, Managing Director, Bharat Road Networks Limited has completed his bachelor of commerce from Shriram College of Commerce, New Delhi and he is an associate member of The Institute of Chartered Accountant of India. He is a former Chief Executive Officer - Infrastructure Project Development of SREI, managing portfolio investments across Roads, Ports, Water and Economic Zones. He has previously served as the “Chairman- Expert Committee on Infrastructure” of Indian Chamber of Commerce. He has an experience of over two decades in infrastructure asset management, project development, project implementation, private equity and M&A.

Bharat Road Network Limited, (BRNL) is a road BOT company in India, focused on development, implementation, operation and maintenance of roads/highways projects. The company was incorporated in 2006 as a developer and operator of highways, road and related projects on a BOT basis.

The company is involved in the development, operation and maintenance of national and state highways in several states in India with projects in states of Uttar Pradesh, Kerala, Haryana, Madhya Pradesh, Maharashtra and Odisha through partnerships with experienced EPC players in the local space where the project is located.

Replying to IIFL, Mr. Bajrang Kumar Choudhary said, “To encourage and facilitate private sector investment and participation in the roads sector, the central government has been continuously adopting various policy measures and providing incentives within the sector.”.

What are the expected benefits of ‘Make in India’ policy on the domestic companies working in the Roads and Highways sector?

Launched in September 2014, Make in India is aimed to boost manufacturing industry and transform India into a global manufacturing powerhouse. Boosting manufacturing and laying the foundations for a better infrastructure always go together. Availability of modern and facilitating infrastructure is thus a critical requirement for the growth of industrial production and overall success of this policy. Make in India policy is therefore likely to translate into an opportunity for capacity building for infrastructure sector to provide better connectivity through roads, ports and airports. Additionally, it would create immense opportunities for jobs; generate demand for construction equipment industry and other raw materials suppliers. The increase in spending in infrastructure would further spruce up economic activity in the country resulting in greater movement of passenger and freight traffic.

The government has allowed 100% FDI in the Roads and Highway sector, how will it impact your business?

The policy for facilitating greater foreign capital in the market has been there for long and it always augurs well for the industry and the economy to have greater access to capital to fund its infrastructure requirement. According to industry estimates, the investment in road projects is expected to double to Rs 9.8 trillion over the next five years. However, there is inadequate investment in capacity building mainly because of lack of resources for transport infrastructure development. Hence, the government is increasingly relying on private sector funding towards revitalising investment in the roads and highways network through BOT Projects under the PPP framework.

To encourage and facilitate private sector investment and participation in the roads sector, the central government has been continuously adopting various policy measures and providing incentives within the sector. All these measures, including the decision to allow 100% FDI in Roads and Highways sector, are going to attract more overseas players to enter the market and provide a major fillip to the infrastructure development plan in India.

As an infrastructure asset owner working primarily on asset aggregation platform, we are happy to witness increased interest from overseas companies. We believe that the positive response from overseas players to the India infrastructure story is an opportunity for us to attract foreign capital and get access to their outstanding construction technology. It is expected to give a further boost to the secondary market opportunities and also provide a required push to the primary market.

The government is considering to roll out ‘Closed toll policy’ where the toll will be charged on basis of distance covered on the toll road. Do you think it may impact your top line revenue?

We welcome the initiative to roll out Closed Toll policy which aims at facilitating seamless transportation and enhances user’s economic efficiency. The system of paying toll for the distance travelled is widely popular worldwide and this could potentially change the tolling industry landscape in India.

There may not be any impact of this policy on existing road projects governed by current Concession Agreement which has limited scope to change the toll collection norms without suitably compensating the existing Concessionaire. But the future road projects could be immensely benefitted from such technology-driven policies which are in line with global best practices. We, at BRNL, have always been committed towards driving efficiency through more advanced and fully proven technologies to improve reliability and efficiency of our business and operations. Hence, we would be extremely happy to participate in any such move which is aimed at ease of transportation and increase user convenience.

What are the expected impacts of ‘Goods and Services Tax’ on the Roads and Highway sector?

The Industry welcomes the GST legislation as a path-breaking & revolutionary legislation and the same is expected to usher India into a One Nation, One Tax Economy in line with global economies. We also believe that GST laws will block the cascading effect and ultimately spur consumption and GDP Growth. Overall GST Council, has aligned the rates in line with present overall tax incidence on end consumer and coupled with Anti-Profiteering provisions, the GST laws will ensure that benefit emanating out of Taxation incidence reduction are passed on to end consumers.

We do not expect a major impact of GST on Roads and Highways, since the Tolling services have been exempted under sl no 5 of Exemption list, in line with the earlier exemption.

Further, earlier Services provided by way of construction, erection, commissioning, installation, completion, fitting out, repair, maintenance, renovation, or alteration of, (a) a road, bridge, tunnel, or terminal for road transportation for use by general public; were given exemption vide sl no 13 of Service Tax Exemption Notification No. 25/2012-Service Tax dated, the 20th June 2012, which have not been provided in current GST schedule for services, thereby  entailing l an additional burden on Tolling Companies. It is expected that GST Council will extend this exemption in the final schedule.

In addition, there is also a slight additional cost incidence whereby our inputs services might marginally increase but the same cannot be passed on to the consumers.

How do you plan to move ahead in the market as roads and highways sector is changing very fast and becoming extremely competitive because of foreign players?

Our business model of infrastructure asset owners gets major thrust once there are more players in the market. We would rather welcome fresh infusion of capital and growing access to innovative construction technology in speeding up the infrastructure development in India.