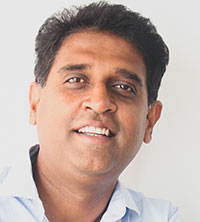 Suresh Rangarajan K is the Founder and CEO of Colive, a technology-driven platform for shared living spaces. A passionate entrepreneur with a cross-domain experience of more than two decades, Suresh has served at the highest level inprestigious organisations and founded some extremely successful companies. At Colive, he manages the entire operations function of the company with a steady focus on its growth targets. A Chartered Accountant by profession, Suresh is also an alumnus of Yale School of Management.

In an interview with Shweta Papriwal, Editor, Indiainfoline, Suresh Rangarajan K said, “All Colive properties are clustered around major IT parks and commercial centres located in reasonable commute time.”

Why did you decide to venture into the co-living space and how has the industry evolved since you started?
In 2015 when we were designing and planning to launch one of new properties, we were planning of co-working and co-living spaces as part of the property. Incidentally, coliving then happened to be the main stream that I took to as I saw a huge opportunity. We ventured into this when coliving.com domain was easily available to be picked up and before the word actually became a verb. Also, knowing the kind of expansion the MNCs are doing in India, the new hires definitely need a place to live and preferably close to their workspace. And coliving spaces will be the best option that they would get. Coliving would also help decongest traffic in these urban cities as people would close to their work places.

Given the traditional mind set of Indians, what is the potential of Co-living model in India?
In India we can see a huge potential for this segment. Also, the recent reports believe that coliving is going create $93bn market annually on rising demand from Millennial and Gen Z. Property consultants call this segment as gold mine of real estate that is largely untapped. Like I mentioned this concept is gaining traction among millennial and Gen Z who want a living something akin to gated community living environment and not just simple rented or shared accommodation. Similar to the unorganized structured sector of 'mess' and 'hostel', co-living seeks to strikes for a balance between privacy in living and social contact between residents. Given the high rents for individual accommodation and lack of family like environment for those who move from smaller towns to metros, the traditional rental arrangement has shortcoming when it comes to comparing.

The co-living sector has total untapped demand of about 46 million beds. Packed with modern amenities, these spaces are designed that meets the taste and needs of the targeted segment (Which was generally targeted towards students earlier but now slowly targeting working professionals as well) and offer residents to rent a lifestyle against renting a home which doesn’t cover basis facilities such as housekeeping, laundry services, security and meals. On the other hand, Coliving provides all the mentioned amenities with additional facilities such as cinema and games room, libraries, gyms, pools and high-speed Wi-Fi thereby paving way for gated community 2.0.

The traditional mindset of the young Indians are evolving. With disposable incomes in hand young Indians’ housing needs no longer is constrained to renting a house or a paying guest. They now seek a place where they find convenience and enjoy the sense of living in a community.

Which are the cities/regions that have shown high demand for Co-living concept & why?
Metropolitan cities like- Bangalore, Chennai, Delhi NCR, Hyderabad, Mumbai, Pune, Jaipur etc is witnessing high influx of floating population or migrant population who come to reside in the cities for various purposes like education or work opportunities and possibilities. First thing they face the problem is high and unruly demands from the landlords who belong to unorganised sector. With the tech parks and business centres proximity, the rentals shoot up even further. This is where coliving concept is tapped. The properties and buildings are taken on lease by coliving space providers like us and then it is rented out to those who are looking for cost effective living. Like this the unorganised players are tapped into organised format and the residents enjoying the premium benefits of coliving concept even though living in an unfamiliar city away from their comforts. This trend, I believe, is a win-win situation for industry like us.

The top cities would be the ones with thriving and expanding IT industry and those would be Bangalore, Chennai, Hyderabad, Pune and Gurugram.

Coliving segment- how is it helping the developers?
This concept is a gold mine for realty players. The interim budget gave a major boost for real estate developers. Investors also get tax rebate on housing loan if they take a loan for buying a residential property. The investor can enjoy the benefit of tax rebate, along with rental income, something not possible in case of commercial property. Moreover, as per many property consultants there are 6-7 lakh unsold units lying with real estate developers in top major cities due to poor demand. These unsold units can be profitable if all the developers get on to the bandwagon of coliving.

What are the challenges in this niche segment?
The major challenge is tapping the unorganised players. It will take a lot of effort to make them understand how coliving concept can be benefical for them. However, recently Income Tax Department survey finds that many PG owners do not file Income Tax returns although most of them have income above taxable limits. Lack of supply in build-to suit models, thereby increasing the time taken from on boarding a property to opening the property for residents is also one of the challenges.

Does co-living have similar growth opportunities as co-working spaces in India?
Yes, if you see till now it was all about coworking and in 2018-19 it will be for coworking space. But with recent property consultants observing the potential in the residential market for coliving, I can say by 2020 to 2022 there will a be a significant spike in the coliving space.

Describe about the technological interventions in this segment. Is it an enabler for these new asset models?
For coliving space providers like us, technology plays a major role in being an enabler. We have adopted at a large scale in access control management engine (IoT based proprietary access control technology), centralised security monitoring ( IoT based video surveillance), Smart home operating and networking assistance (SHONA)- (AI based assistance for customer service and concierge). Also, now coliving space providers have app enabled services for hassle free rent payments, property exploration and evaluation services.

How does it compare to the industry abroad?
The industry abroad is more mature than here as it just started about 10 years ago. The concept is gaining popularity and the masses are embracing the concept in India. Co-living is an extremely popular choice of living in the commercial cities of China due to space congestion and sky rocketing real estate prices around business hubs. Co-living is the new way of living in the cities and a preferred way to enjoy the desired lifestyle. Backpacking groups in Europe, young working professionals in Singapore, Hong Kong, students in Australia, Unites States and UK, people prefer to live in communal sets to get a feeling of homeliness and find a strong sense of belongingness. A place to connect exchange ideas, feel comfortable and safe in unfamiliar surroundings.

What are the factors that are driving demand for co-living spaces?
Millennials and Gen-Z are multi-taskers, glued to the internet, well informed and live in the social media environment. They are always on-the-move and travel frequently for work/pleasure. More than anything, they believe in investing towards creating memories and value experiences over creating assets and possessions.  Pride of property ownership is not a Millennial or Gen-Z thing, though they still want to be part of a community and this is where the concept of coliving was born.

Also, the other factor that is pushing the concept of coliving is the feeling of loneliness. One of the three biggest and topping threats in 2019 according to World Economic Forum is loneliness even though we have 7.53 billion people, millions of other species around us. Harvard study, loneliness rates have increased by 20% every year in the past 2 decades. Hence, there is a need to build a strong sense of community where new friendships and relationships can foster. Coliving is creating a fresh mode of accommodation for a brave new world with emphasis on improving the issues of loneliness and creating better community relationships.

What are the new trends being seen in the co-living space?

Which are the key areas that your group is covering and what are your future expansion plans?
Most of the young Indian population is migrating to metropolitan cities for better career opportunities and an improved lifestyle, a trend among the youth of the western nations in 1980's, driven by improved economic independence and liberated living choices. Hence, our tagline Colive- your way. There is a supply constraint and we are focussed to catering to this demand by creating stylish, serviced apartments. We offer lifestyle as a service, where we ease the burden of daily chores

Funds rose so far? Are you planning to raise funds?
Second week of this April we entered into a partnership with Salarpuria Sattva and raised $9.2mn and in the past we have raised a sum of INR 12 crores from the funding round which was led by the private investment arm of SAR Group Family Office (“Ncubate Capital Partners”). With the fund that we raised by entering into a partnership with Salarpuria Sattva Group, we will be heading forward to expand Colive operations in news markets such as Hyderabad, Mumbai and Pune. We now have more firepower to turn Colive into an entirely full-stack, tech-driven platform. Moreover, we plan to invest in the build-to suit model inventory for co-living purposes and scale up operations from 12,000 beds to 1 lakh beds over the next two years.

What are the facilities and amenities that you are providing in these spaces?
Co-living space meant for working professionals, Millennial and Gen Z are generally equipped with basic facilities such as housekeeping, laundry services, security and meals, apart from additional facilities such as gaming consoles, libraries, gyms, pools and high-speed Wi-Fi. This space is redefining the meaning of gated community which was predominantly enjoyed by the families living together in a flat. Coliving is paving way for gated community 2.0.