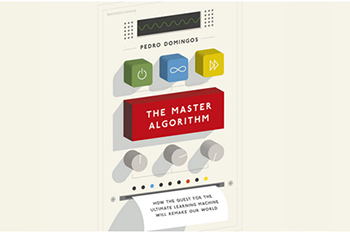 Beyond doubt, this enduring work is for students of life - those with an appetite for wonder as the author aptly puts it – regardless of whether they are machine learning experts, business users, policy makers, scientists, engineers or curious commoners.

Tech pros might hold it against the prophetic title: “The Master Algorithm: How the Quest for the Ultimate Learning Machine Will Remake Our World” especially given the author’s provisional prognosis “If it exists, the master algorithm can derive all knowledge in the world” but that doesn’t take away even an ounce from its value prop, of being a definitive source on the essence and evolution of machine learning – right from I J Goods’ speculation in the 60s down to the current AI developments. We don’t know much about his all-knowing Master algorithm in the making, what we know for sure is that Pedro Domingos is a master story teller. A computer science professor at the University of Washington, his diverse interests - literature, cinema, music, travel and sport – make his book a compelling read. Wit and wisdom abound in ten wholesome chapters, nestled between a condensed prologue and conscientious epilogue.

As the author passionately highlights, the inherent fault tolerance of machine learning is a blessing in disguise, the ability to learn from mistakes over time without human intervention, almost always yields phenomenal results as most web engine recommendations based on user inputs - of movies, hotels, restaurants and other service-providers - have shown. Bugs in machine learning are not necessarily villains. To err is machine, more than human, but the learnings are way faster.

Whichever way you read this book, you gain invaluable insights.  Ideally, you should follow the author’s linear path – devoting one chapter each (chapters 3 to 7) to five competing tribes of Machine Learning – Symbolists inspired by philosophy, psychology and logic, Connectionists swearing by neuroscience and physics, Evolutionaries drawing on genetics and evolutionary biology, Bayesians rooted in statistics and Analogizers influenced by mathematical optimization, highlighting their respective pros and cons with amusing examples, commonalties and exclusivities, and more important their shared resolve to walk past each other, followed by the author’s clarion call for a grand unification where algos across the five communities would merge into one, paving the way for a new Theory of Everything.

But even if you causally sift through the pages, you will find scores of astute takes and pertinent observations that merit close attention and introspection, not the palpable debate whether Pedro’s sketch of a master Algo ‘learning everything that can be known’ is Utopian or pragmatic. Aspirants, amateurs and professionals, all stand to gain from the illumination. Here’s a random snapshot to give you a better idea of the insights and quips:

“All of the important ideas in machine learning can be expressed math-free.”

“Computer science is still young, and unlike in physics or biology, you don’t need a PhD to start a revolution. Just ask Bill Gates, Messrs. Sergey Bin and Larry page, or Mark Zuckerberg.”

“Science today is thoroughly Balkanized, a Tower of Babel where each subcommunity speaks its own jargon and can see only into a few adjacent subcommunities.”

“If I am the expert on X at company Y, I don’t like to be overridden by some guy with data… If you want to be tomorrow’s authority, ride the data, don’t fight it.”

“The housing bust barely registered: it main effect was a welcome transfer of talent from Wall Street to Silicon Valley.”

“Neural Networks’ first big success was in predicting the stock market…A typical investment fund would train a separate network for each of a large number of stocks, let the networks pick up the most promising ones, and then have human analysts decide which of those to invest in. A few funds, however, went all the way and let the learners themselves buy and sell. Exactly how all these fared is a closely guarded secret, but it’s probably not an accident that machine learners keep disappearing into hedge funds at an alarming rate.”

“Indeed, the history of machine learning itself shows why we need learning algorithms. If algorithms that automatically find related papers in the scientific literature had existed in 1969, they could have potentially helped avoid decades of wasted time and accelerated who knows what discoveries.”

“If we could revisit ourselves as infants and toddlers and see the world again through those newborn eyes, much of what puzzles us about learning – even about existence itself – would suddenly seem obvious.”

It’s remarkable how the author explains many intricate terms as lucidly as possible for the lay man’s comfort. Readers would love his exposition of several machine learning peculiarities like the ‘overfitting’ problem and ‘noise’ of data errors (unfolded through an amusing ‘dating a lady’ predicament and citing Russell’s famous inductivist turkey), element of serendipity and risk (drawing an action-packed analogy from Clint Eastwood’s movie Dirty Harry), perils of learning without knowledge and the indispensability of pre-conceived notions (compared with the protagonist of Jones Luis Borges’s ‘Funes the Memorious’). The book is a treasure trove of information – whether actionable or not - for the truly inquisitive mind which knows no bounds of academic disciplines and professional spheres…

En route the voyage, you are introduced to luminaries across spheres and made aware of many a luminous fact – how Adam the robot scientist is busy figuring enzyme encoding genes in yeast at the Manchester Institute of Bio-technology, how the Obama-hire Rayid Ghani proved that learning algos are the ultimate retail politicians, how Newton’s third law of induction forms the backbone of modern science, how the addictive video game Tetris is a great intro tutorial on NP-completeness - the foremost theoretical challenge of computer science, how the essence of the analogizing tribe can be grasped through the sinisterly suitable example of Frank Abagnale Jr., and how the casino teaches us a lot about the exploration-exploitation dilemma of machine learning (“A genetic algorithm is like the ringleader of a group of gamblers, playing slot machines in every casino in town at the same time.”)

Chapter 9 is like a workbook cum map to the master algorithm, the grand unifier of machine learning that begins with a leisurely walk down the alley of metalearning before reaching Master Algo, capital city of the Machine Learning continent, also the confluence of the five rival tribes presumably in heartfelt response to the author’s plea. In chapter 10, the author anticipates the evolving relationship between humans and computers in an unabashedly digital world. Most predictions seem highly likely given the Golem-like advancement of machine learning that we are already encountering, master algo or no master algo. And yes, there’s a good chance that the master algorithm, if and when it is born, could turn into a monster algorithm to play havoc with our personal lives…For a moment imagine our digital halves becoming the new better halves controlling our lives in the guise of enabling them.

With the author’s candid submission, that it’s hard to measure how far we are from the master algorithm given the non-linear progression of science, there’s no reason why the obvious, that the path to his dream is elusive,  needs to be overstated in a rather dismissive manner as some reviews have done. What’s more important are the author’s sincerity, sensibility and sensitivity to the larger cause of machine learning which merit emulation more than mere adulation. To quote him, “If one day you invent the Master Algorithm, please don’t run to the patent office with it. The Master Algorithm is too important to be owned by any one person or organization. Its applications will multiply faster than you can license it. But if you decide instead to do a startup, remember to give a share in it to every man, woman, and child on Earth” (Nothing to take away from the sanctity  of the author’s plea but we really wonder how the last bit would be achieved should the would-be start up founder decide to heed the advice)

Domingos expresses hope, ahead of confidence, that someday soon, the potent chemistry of big data, grand unified algos and quantum computing would help humanity in unimaginable ways – like curing cancer, combating terror or creating new knowledge. Every step ahead is getting that much closer to the next version of machine learning, that would in turn be several notches above its current feats in curative medicine, stock market strategies, online advisory or smartphone commerce.

Taking inspiration from the author’s accidental tryst with an AI book in his college days, we hope the curious student of today dives deep into this book’s riches with an aim to soar higher. If by the end of the read(s), he or she can make out what P = e^w*n/z means, the Master Algo might well grin from ear to ear in its mother’s womb.