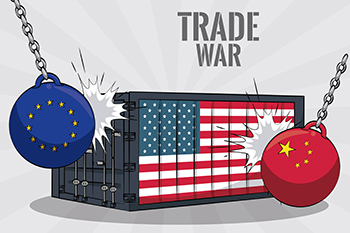 After “talks” with Beijing produced no concrete results, US President Donald Trump has gone ahead and imposed a third round of tariffs on $200bn worth of Chinese goods.

After “talks” with Beijing produced no concrete results, US President Donald Trump has gone ahead and imposed a third round of tariffs on $200bn worth of Chinese goods. This means that almost half of all the products the US buys from China will have tariffs on them, which incidentally also equals 40% of China’s exports to the US.

What raises the stakes though is that the latest list targets almost 6,000 items, which includes handbags, rice, textiles, suitcases, and cutlery among other things. Industries such as agriculture, manufacturing, textiles, and retail stand to be affected.

China lambasted the US action, vowing to counter-attack with plans to slap tariffs on another $60bn worth of US goods. This means a whopping 80% of US goods will be subject to Chinese levies.

Trump’s justification for this trade offensive is simple i.e. China is engaged in “unfair” trade practices. Thus, these tariffs on Chinese goods will make American goods cheaper, boosting local businesses and supporting the domestic economy. What does Trump plan to achieve? Trump feels that the risk of economic harm will urge China to change its policies.

Anyways, how did the trade battle proceed until now? What are the items that have been targeted? Are the two sides even talking? We elaborate.

What has happened so far?

The year 2018 signalled the beginning of a tit-for-tat confrontation between the world’s two largest economies. It all began by US’ covert signals to China in January. Washington enforced tariffs on washing machine and solar cell imports, attacking China’s global supply chain. Subsequently, in March, with a view to promote US protectionism, Trump signed tariffs on imported steel and aluminium from all nations, including China. Further, it proposed tariffs against China on discriminating trade practices related to technology transfer, IP, and innovation.
As a retaliatory measure, China unveiled tariffs on $3bn worth of US imports, which included fresh fruits, nuts, wine, and pork, among other things. Apparently, this move was after trade talks between the two sides broke down on US’ demand that China stem its support for high-tech industries.

Thereafter, both sides refused to back down. In June, the US announced its decision to move ahead with tariffs on $50bn worth of Chinese goods, mainly with the intention to cut investment in sensitive technology. China retaliated in kind, targeting the president’s political base, like soybean farmers. Trump, meanwhile, continued his rhetoric, threatening to charge levies on another $200bn of Chinese goods. Next, despite the volley of tariffs, the US and China reportedly tried to restart trade talks.

However, in August, China announced its intention to increase tolls on $200bn worth of Chinese goods from 10% to 25%. Later, in the same month, tariffs on $16bn of Chinese imports began.

As Trump has claimed that more than $500bn worth of Chinese goods could be hit, which apparently is the entire value of Beijing’s exports to the US last year. China, meanwhile, doesn’t have as much scope to retaliate through trade. It could however seek other ways to get back to the US.

So, in the latest round, what’s in and what’s out?

Trump sees the trade tariffs as a “bargaining chip.” In a tweet, he spelt out his intention clearly "If countries will not make fair deals with us, they will be Tariffed!”

In this phase, everyday items such as suitcases, handbags, toilet paper, and wool have been targeted. Further, food items such as frozen meat, types of fish like smoked mackerel to scallops, soybeans, various fruits, cereal and rice have also been included in the latest list.

For the time being, though 300 items, including smart watches, bicycle helmets, play pens, high chairs and baby car seats have been kept out of the list. This is after fierce opposition from companies like global tech giants such as Apple, Dell and Hewlett Packard Enterprise, who were worried that tariffs will increase their costs as many of their exports are manufactured in China.

What does this mean?

Many US companies and businessmen have been critical about Trump’s tariff plan. What’s more, farmers, manufacturers, retailers and other industry gods have opposed the levies as “taxing Americans.” They claim that an escalation in the trade war will “squeeze American businesses with higher input costs and American farmers with decreasing commodity value.”

Now, US reportedly buys about four times from China than what it sells to them. Thus, despite China’s limited scope to continue the trade war in this sphere, it has various other ways to strike back. It can take action against US firms, which generate $300bn sales in China. Companies like Apple have significant sales and operations there. It could restrict tourism to the US, where US is at an advantage, that is, a surplus. Another step, apparently not a manifestation of Chinese intervention but which riled Trump no end, is devaluing the yuan. This move will nullify the impact of tariffs making Chinese goods cheaper for other countries to import.

For the moment though, things appear to be in a balance as the two sides don’t seem to be talking. Top officials had discussed the situation last week. However, it didn’t reach any fruitful conclusion. Trump’s latest move will undoubtedly sour relations further.