Current account deficit is lower but not yet in comfort zone

CAD for the Jun-19 quarter came in at $14.32 billion, marginally lower in absolute terms than $15.8 billion announced in the Jun-18 quarter.

The above table captures how the current account deficit was arrived at by the RBI for the Jun-19 quarter and the Jun-18 quarter. Three things logically follow from the above table. Firstly, despite a higher merchandise trade deficit in Jun-19 quarter, the bigger services surplus has more than compensated for that. This was largely driven by a pick-up in IT and other allied services in the current year.

Secondly, the next level of flows from remittances and NRI transfers were sharply higher in the Jun-19 quarter, which more than compensated for the higher investment payouts this quarter. To encapsulate the shift in the quarterly CAD on a YOY basis, the fall in CAD in the Jun-19 quarter can be largely attributed to better services exports and larger remittances from Indian nationals living abroad. 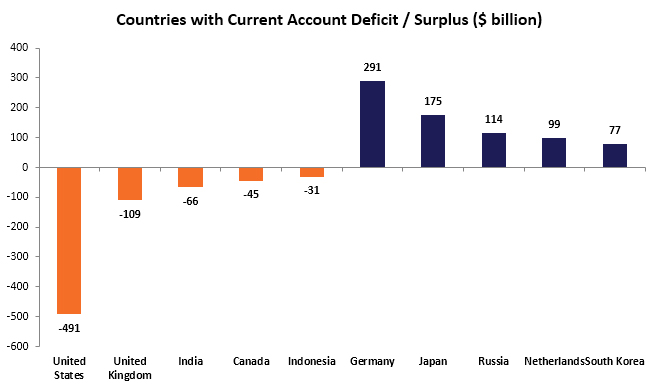 With India and the UK at almost the same level of GDP, UK’s current account deficit is a lot more uncomfortable as compared to India. For a $25 trillion economy like the US, the CAD is approximately at the same share of GDP as India. Here is why 2% CAD a matter of concern for India.
The normal tendency is to justify higher CAD in India through the case studies of the US and UK. But such comparisons can be odious. The US has the exorbitant privilege of dollar being the hardest of currencies and that gives the US a distinct advantage. Similarly, the UK situation could change sharply once it gets out of BREXIT. The immediate challenge for the RBI and the Ministry of Commerce is to keep the CAD under 1% of GDP. That would surely require a good deal of support from oil prices.