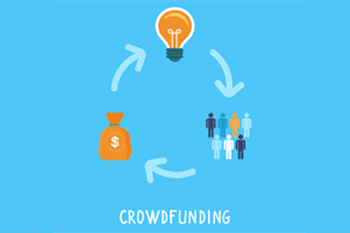 Economics for Everyone - Crowd Funding

Crowd funding as means of raising money for a creative project, a benevolent or public interest cause or a business venture, through small financial contributions from people who may number in the hundreds or thousands.

Professor Sen as usual was preparing for his lectures when Kumar entered his cabin. Kumar was one of those studious, curious, committed students in the class. Kumar and some of his classmates regularly visit the Professors cabin and discuss matters relating to Economy, Policy and issues related to current affairs. Kumar was accompanied by some of his friends

Yes, Kumar tell me what is the question you have today said the Professor with a smile. Sir, I find you reading and immersed in your thought process for long time, what is it bothering you, asked Kumar.

Yes, Kumar, it is an interesting read on Crowd funding.

What is it sir, asked Kumar

Well, look at this news. Few years ago, a lady was diagnosed with colon cancer. This lady decided to fight it the best way possible and wanted to get the best hands in the field of medicine to treat her illness. She received great support from her family and friends. They found her, one of the best methods in treating colon cancer. But the costs involved were exorbitant and the treatment would become a burden on her family’s depleting financials. However, her friends came up with a solution. Within few months, they signed up on a Crowd funding portal and began a campaign to collect $100,000 (nearly ₹70 lakh) for her treatment. Within two weeks, the team was able to collect the amount, which she would use for her treatment that lasted for nearly two years. She underwent many chemo therapies and surgeries and in 2016 was declared cancer-free. She is among many patients in India who are turning to Crowd funding platforms to raise money for treatments otherwise unaffordable to them. Even though the sector works under tight regulations, with stringent SEBI rules, Crowd funding is gaining popularity in India.

Sir, what is it asked Raj? We wanted to ask you for long time sir, said Kumar.

Ok, the Professor started explaining, in layman terms Crowd funding, as the name suggests, is raising money for a specific purpose through a large number of people. Although Crowd funding sounds a very western concept but it has been immensely popular in India from centuries. Remember how people walked up to you, gave you some notice during  the  festive seasons or during the time of natural disaster  to gather donations for conducting the event  in your  locality or sending it to the government. That is Crowd funding. The Crowd paid up for a project that they wanted to do it.

Crowd funding as means of raising money for a creative project (for instance, music film book publication), a benevolent or public interest cause (for instance, a community based social or co-operative initiative) or a business venture, through small financial contributions from people who may number in the hundreds or thousands. The contributions are sought through an online Crowd funding platform, while the offer may also be promoted through social media.

Sir does this happen in India asked Shalini another student

Thanks to the advancements in social media technologies and the rise in digital literacy rates in the country and abroad, patients from even smaller towns and in some cases villages, are now able to tap global Crowd funding channels. Crowd funding has become a popular method to raise money for early stage business and charitable organisations. Globally, it is a multibillion dollar industry. According to recent reports, the global Crowd funding market is expected to grow at a CAGR of around 17 percent from 2017 to 2021. According to India Philanthropy Report 2017 developed by Bain and Co, funding by private individuals in India was Rs 36,000 crores in 2016.

Donation Crowd funding is the most basic form of Crowd funding where there is no expectation of return. These usually function to raise money for charitable purpose or a social cause. This form is fairly unregulated. Under Reward Crowd funding, investors get a product or some benefit in return of their investment. This form is also not heavily regulated by the government.

The above two types are the most common forms of Crowd funding we see in India and being in the nature of donations, at present only attract basic fiscal legislations such as the Income-tax laws and Foreign Contribution Regulation Act.

Equity Crowd funding in its traditional sense as of now is not permissible in India due to the provisions of a. the Companies Act, 2013, b. the Securities Contract (Regulation) Act, 1956, and c. the SEBI Act/ Regulations which govern equity fund raises by companies, and intermediary activities such as merchant banking, investment advisory, broking, exchange services, alternative investment funds and collective investments etc. Platforms presently operating in this sphere generally use a quasi-equity Crowd funding model on the basis of private placement principles under the Companies Act, 2013. A few of the companies working in this field.

There are currently two crowd funding models that are of interest to regulators (SEBI and RBI). The equity-based model allows for a stake in the venture via private placement. And peer-to-peer (P2P) lending connects lenders and borrowers who may mutually agree upon either a fixed interest rate or a variable one. Both operate via third-party digital platforms.

In western countries, Kickstarter and Indiegogo have been among the leading Crowd funding platforms. Many aspiring entrepreneurs even put their latest technological prototypes for Crowd funding and a lot of industry enthusiasts support the cause. A lot of times, these entrepreneurs even overshoot their target. Many creative projects like books and other art related projects also get Crowd funded.

Sir what are the problems and prospects asked Kumar?

Professor Sen replied, Economic theory helps us to understand, the recent rise in Crowd funding activity.  First, matching funders with creators is now more efficient and effective due to lower search costs with the emergence of online transaction practice. Second, risk exposure is reduced because funding in small increments is economically feasible online. Third, low communication costs facilitate better information gathering and progress monitoring for distant funders and also better enable funders to participate in the development of the idea.

Thus, from the point of view of Creators, they may choose to raise capital through Crowd funding rather than a traditional channel due to two primary incentives such as a lower cost of capital, and access to more information. If Crowd funding increases competition in the supply of early stage capital, then it may drive down the cost of capital across other channels for early- stage funding.

From the funders point of view it has the following advantages like - Access to investment opportunities, Early access to new products, Community participation, Support for a product, service, or idea. Formalization of contracts.

But there are equally challenges the Professor took a pause.

What is it sir asked the students.

The Professor continued, Crowdfunding requires creators to disclose their innovations in a public forum. The disincentive is strongest for those creators who are most worried about imitation, especially during the period between raising capital and launching their product. In addition to the risk of disclosing too much information to competitors, this requirement may have negative repercussions on intellectual property protection and on bargaining with potential suppliers.

Another challenge comes from the opportunity cost of raising capital from “the Crowd” rather than professional investors. Angel investors and Venture capitalists, often bring additional value to the company, such as industry knowledge, relationships, and status.

Not only are nonprofessional Crowd funders less likely to bring these benefits, they are also less likely to make the effort to provide  these benefits to the creator  because the returns for doing so are much lower given their typically much smaller level of investment. Investor management presents another challenge. Because Crowd funders generally fund in smaller amounts than, say, Angel investors, more investors are required to raise a given amount of capital. Investor management therefore may be significantly more costly due to the sheer number of funders who need to be managed. The process can be challenging as the number of investors rises. Higher the numbers, the creators sometimes have no control over who funds their projects.

Professor Sen. continued, there are equal challenges for funders, some of the key disincentives they face are, Fraud, Creator incompetence, and project risk. All three are exacerbated by the particularly high degree of information asymmetry associated with equity- based Crowdfunding in an environment with minimal oversight and regulation. Infact, many times funders have much less information than creators. This is also because Creators face the uncertainty and insecurity of pressure, losing ownership of creation to the funders and so on.

Thank you sir, the students greeted the professor and left for the next session of lectures.